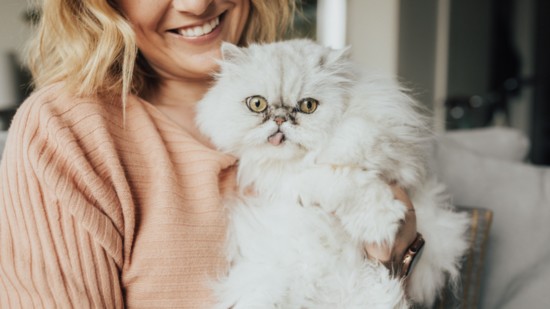 Lindzi Cox is a director of business development and a former contestant on The Bachelor. She may not have found true love on TV, but she’s found it in a 3-year-old Holland Lop rabbit named Buster.

What makes being a rabbit owner different than being a dog or cat owner?

We are pretty much on the same eating plan (minus the hay and rabbit pellets—I don’t care for that stuff) so grocery shopping is pretty easy. Kale, arugula, celery—those are a few of our favorites around this household.

How did Buster come into your life?

Well, I offered to bunny-sit him for some toddler friends, and then I decided that I wanted him full-time, so he stayed. Don’t worry—it was an amicable acquisition. But, strangely enough, nobody has asked me to pet-sit ever since.

What would you say is his guilty pleasure?

Bananas, coffee and wine. He likes to grab beverage glasses with his little paws and tip them toward him to drink. This ends in spilling 100% of the time, so you have to be really careful because he only goes after the beverages that stain.

Does he have any quirky habits?

Carrying his snacks to my floor length mirror so he can watch himself eat, chasing the vacuum—and then, there is the blow drier. He loves when I point it at him, and he gets that windblown look.

As a vice president at Merrill Lynch, Traci Bumpus aims to improve clients’ lives, but the life she’s helped the most just might belong to a 13-year-old Persian cat named Cosmo.

What was your first impression of Cosmo?

He was about 6 months old, living down the street, and after a series of odd events, he came to live with me for a few months. He was tiny and sick and a little scared. I nursed him back to health, but on Christmas Eve his original owner tried to take him back, and I had to let him. But Cosmo escaped and ran back to my house, then hunkered down on my porch until I came home around midnight. He was so scrappy and brave, and he’s been with me ever since!

What do you find most endearing about him?

Cosmo’s tongue is always sticking out. It’s his signature. Also, he always wants to hold my hand when he sleeps.

Does he do any tricks?

Well, Cosmo doesn’t have any teeth, so I only give him wet food, but he still steals his cousin Watson’s kibble when he’s visiting. He swallows it whole. Where there’s a will, there’s a way, I suppose!

If you were to describe Cosmo’s personality in three words, what would they be?

Sweet, salty and a survivor.

When luxury realtor Travis Groome isn’t helping someone buy their dream home, he’s got a full house of his own with 2-year-old labradoodles, Scout (black) and Murphy (tan)—and teenage (human) triplets.

What made you want to bring them home?

I fell in love with Scout’s playful nature, and when I would go visit him in their first weeks, Murphy would always curl up in my lap—very different personalities. Eventually, the breeder said, “You know you’re going to end up with both,” and I did.

They are brothers and act just like all siblings do—very similar to our triplets!

What do you most look forward to when you come home to them?

I just love the sweet play time when they both go crazy for attention—as if they have been deprived all day while they are home alone, just waiting to lick us nonstop and show off their toys as though for the first time.

How have they changed your life?

Pets truly love unconditionally. It is so nice to come home after long, stressful days and have them share the most sincere joy and love imaginable.