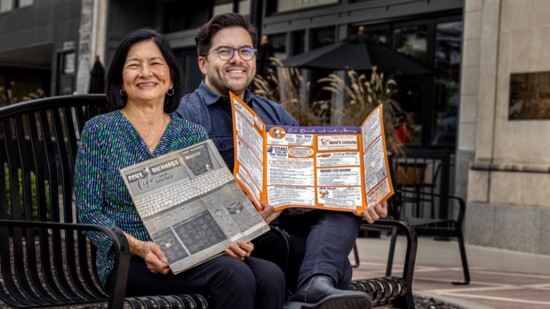 Memories of an iconic Topeka eatery

Ask longtime Topekans to name a now-closed restaurant they wish would make a comeback, and Por’e Richards just might top the list. The iconic eatery, first opened at S.E. Ninth and Quincy in 1957 by owner Richard Cummins, was known for its dark, cozy atmosphere and all-American cuisine. The location changed to Seventh and S. Kansas Ave. in 1984, where Iron Rail Brewing is today.

Many people remember Por’e Richards having a jukebox in every booth and staying open until 4 a.m. The atmosphere was dark and smoky. Brass railings, Tiffany-style lamps, and paintings of tiki-bar-themed green ladies completed the décor.

“At that time, it was one of the only places open late night and serving food until 4 a.m., which was huge,” says Richard’s son, Brandon. “It was always available and convenient.”

The restaurant served breakfast all day. The in-house butcher prepared their prime rib and steaks, while the bakery made cinnamon rolls, pies, cookies, and the popular devil dogs. Richard’s wife, Ida, says people often ask her for the restaurant’s French onion soup recipe. Unfortunately, the kitchen’s recipe book was lost after they closed.

Richard was known as a kind, soft-spoken gentleman who would give you his last quarter if you needed it. He welcomed customers at the front door, joined them at their table when invited, and quietly observed the dining room from a back corner.

“He would be there, being watchful without encumbering the guest experience, and letting the staff do their thing,” says Brandon.

Ida adds, “He was very, very caring. He was a very honest, sincere person.”

Richard died in 1989. Never having managed a restaurant, Ida depended on the longtime staff to keep things going until diminished downtown visitors led to its closure in 2001.

“The employees that stuck around had developed these friendships and relationships over 20-some years with our guests,” Brandon says. “So, it wasn’t just my dad. It was everybody running the place that had deep-standing relationships with regulars.”

Brandon was five years old when his dad died. He remembers coming to the restaurant with his Aunt Ruth at 5 a.m. She would prep the baked goods, and he would nap in one of the booths before school.

“For me, hearing everyone’s stories about Por’e Richard’s has actually helped me better know my dad,” he says. “I’m living vicariously through everyone who got to meet him. If anything, it’s really heartening that it lives on in the way that it has. It doesn’t matter how big the city is or how fancy the restaurant is. It’s the relationships that were forged there that end up lasting longer than anything else.”