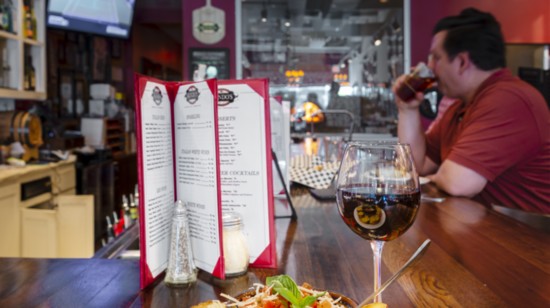 Mondo's, a taste of Italy in Tulsa

Authentic food from the Aloisio family

Half a century is a long time to do something … well, do anything for that matter. In a world where so many things come and go fading away into our memories, what is it that makes some last and others not? To answer this question, why not ask a family that has done it? Perhaps it’s a secret but a better answer would probably be tradition. And, not the tradition established back in October of 1969 that began when Lou Aloisio, a.k.a. Papa Lou, opened Mondo’s Ristorante Italiano, but one that goes back to Italy where the recipes and atmospheres for authentic Italian food were created.

Everything seems to revolve around family and tradition and that is exactly what one experiences while dining at Mondo's. In fact, most of the employees are related spanning three generations of American Italians preparing meals using the same recipes and care that was brought over by Lou’s father Angelo, a chef in Italy before coming to America in 1920.

“This is truly a family-owned and operated restaurant. Our motto is, whenever the doors are open, there is always an Aloisio in the house,” son and part-owner Rob Aloisio said.

“We just won ‘Best Italian Restaurant in Tulsa’ from the voters through the Tulsa World. We have won this award numerous times over the years,” he said. He explained that this is because the family takes pride in their food and the service offered by a true American-Italian family in true Italian style. At the heart of the operation is of course 86-year-old founder Lou who can often be seen in the dining area, “shaking hands, kissing babies,” and interacting with the guests. Rob and two brothers, Mike and Christo, take care of the day-to-day operations.

Rob says the restaurant’s many regulars have been dining for years and its element of not changing with the times contributes to this success. For instance, the original sauce made from scratch and recipes like lasagna and homemade meatballs is still the same as 50 years ago.