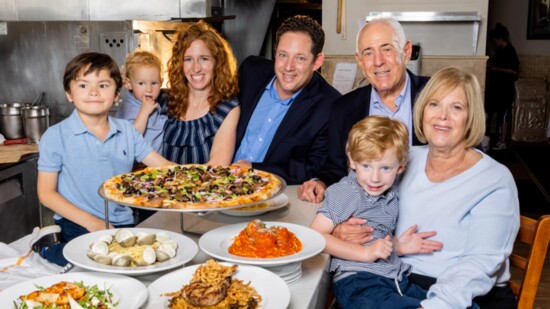 “This place is like the Cheers Restaurant – it’s where you come with your friends and family – a neighborhood gathering place that’s family-run by people who care.” Donald Kahn

If it’s possible to recreate the homey atmosphere of the 1980’s television hit Cheers (a throwback to another place and time) whose theme song “Where Everybody Knows Your Name” summed up its likability…then Gregorio’s Trattoria has succeeded. Owners Greg Kahn and his father Donald Kahn pride themselves not only on running a first-class, informal restaurant but by being an important part of the local community they serve. According to Greg, “We don’t just serve dinner to our guests, we take care of local schools, churches, religious and other charitable organizations.” He adds, “That’s what we’re here for: to provide an outstanding experience where we treat our guests like family.”

Their story dates back to October 2008 when the Kahns bought an existing restaurant in Reston, Va. and transformed it into Gregorio’s Trattoria. Greg’s dream was to use his experience working in Italian dining facilities to create his own restaurant, offering great traditional Italian dishes prepared to order with fresh ingredients. He began by using authentic Italian recipes passed on from generation to generation. Greg credits his former chef Carmine and current chef/Director of Operations Chris Fargiano for creating dishes saved from their own families’ vault.

Eight years ago they opened a new Gregorio’s Trattoria in Potomac’s Cabin John Village and eight months ago another Gregorio’s opened in the Shops at Sumner Place in Bethesda. Although all three locations offer the same menus, the Potomac location has a special place in Greg’s heart because he and his sister grew up in Potomac and attended Churchill High School. His dad and mom are no newcomers to the county either, having grown up in Silver Spring. Now Greg and his wife Kate are raising their three children, ages seven, five and one, in Potomac.

Even though Greg travels to all three restaurants on a regular basis, most evenings you can find him at Gregorio’s Potomac location. Greg notes that “through all the hours I’m awake, Gregorio’s is what I’m focused upon.” And in spite of the long hours, “I believe being a parent makes it easier to get out and push because you know why you’re doing it.”

The special appeal of the Potomac restaurant (the busiest of the three) is obvious since friends and neighbors visit on a regular basis. Greg and Donald are often pleasantly surprised when old friends they haven’t seen in years stop by.

So what keeps customers coming on a regular basis? As mentioned above, the delicious Italian fare is made to order from fresh ingredients. According to Greg, the most popular items are the classic Italian dishes such as pizza, spaghetti with meatballs, lasagna, chicken and eggplant parmesan. However, a glance at the menu lists countless more mouth-watering meals along with not to be missed “Daily Specials." They include tantalizing choices such as shrimp fra diavalo (sauteed shrimp in a spicy marinara sauce), arugula pear salad, quattro formaggio (four cheese pizza) and double chocolate-chocolate cake, to name a few. Most items are between $15 and $30, with some more expensive items closer to $40.

Gregorio’s is available to help celebrate special occasions with their family-style meals, home and office catering, or (even) a personal chef service.

Those who work in the restaurant business know it is demanding under the best of circumstances, and Covid-19 threw a wrench into all of their businesses. For a while Gregorio’s offered only delivery or curbside pick-up. Greg found jobs for all his employees during this challenging time; however they often changed roles as needed with servers, hosts, and bussers finding themselves temporarily working as cashiers or delivery drivers.

Donald is forthright about the challenges the pandemic presented: “All the time the government is coming up with new rules, new twists, and with virtually no notice.  Although it took a while, things are gradually getting back to a new/somewhat normal."  Donald notes that “When the Potomac restaurant opened we only serviced inside diners, then we added a few tables outside, and then (due to the pandemic), it was only outside. Now that dining has returned to both inside and outside, our locations are busy." Carry-out and delivery orders have increased through the 13 years since they opened the first Gregorio’s (spiking to 100% during the peak of the pandemic). While those services used to be about 20 percent of sales, they now account for more than 40 percent.

The  struggles facing those who run a restaurant don’t seem to be subsiding as even as coronavirus restrictions get lifted. The post-pandemic challenges – finding quality staff, higher prices and the availability of food items (formerly thought of as commodities) – are compounded as rents continue to increase. Donald notes that the fresh ingredients they rely on are becoming more difficult to buy.

In spite of all the challenges they face, Donald and Greg always return to their desire to be an integral part of the communities they serve. They are open to raising funds for non-profits in amounts the charities wouldn’t be able to raise for themselves by hosting what they call FUN-RAISERS. When sport teams, churches, synagogues, schools or PTAs pre-arrange to bring their friends and associates to Gregorio’s, (requiring a minimum of 25 guests), Gregorio’s donates 10 percent of sales generated to their organization. “That’s what we’re all about,” Greg and Donald agree, “Being part of the community – your friends and your neighborhood.”