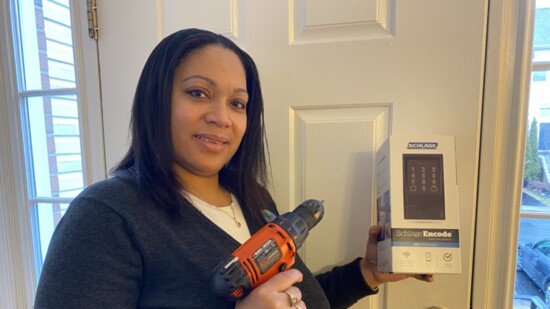 How Raphaela O'Brian Tames Technology To Save Time, Money, and Energy

Automated home appliances carry with them the promise of lower utility bills and innumerable time savings – if you could just figure out how to install and configure them! Admit it, if you’ve been tempted by, but passed on, buying one of those “Google Nest Learning Thermostats” from Costco, what stops you is the nagging suspicion that these gizmos are smarter than we are.

That’s not an indictment of our “DIY” intelligence, only our varying patience with technology installation and integration. We may adore the idea of “smart” devices but don’t have a clue how to make them work for us with the calm assurance of someone who actually knows what they’re doing.

Enter Raphaela O’Brien, Angel of Automation. Raphaela (Ella to her friends), like her namesake, tackles the demonic complexity of home automation and entertainment systems in all their disparate forms, and angelically, capably bends them to her customers’ will. “I wanted to make people’s lives easier by helping them use automation in their homes, in their business, and in their life in general,” she says. Her 100% woman-owned business is called AIVI Global, where AIVI stands for Automation, Integration, Visual and Infrastructure – all elements of the technologies the company employs to unleash convenience and utility.

Though she’s not herself an engineer, she worked in the architectural and engineering field after college and has an uncanny understanding for how technology can transform our lives in practical ways. AIVI began as a security firm focused on helping businesses install security cameras and sensors. Her own appreciation for how hard it can be to understand and properly deploy autonomous systems residentially led her to reach out to help homeowners too. Now, most of her customers are either growing families looking to variously conserve energy or end temperature regulation disputes; or those looking to automate and monitor the homes of loved ones determined to “age in place.”

The latter might make use of refrigerator sensors to monitor grocery needs, motion sensors in the bedroom or bathroom to make sure older adults are still getting around, or even hidden cameras to monitor in-home health-care providers or companions. None of these appliances are substitutions for personalized attention, but help preserve older relatives’ autonomy while still being able to look after them in a supporting role.

Ella typically begins by asking her clients about the pain points they want automation to solve. “People with young children may be most annoyed by the lights being left on so we look at whether they’d find it easier to have motion sensors installed or if they’d rather have lightbulbs that they can turn on and off via an app on their phones. Do they want analytics to find out when there is no one in the room the lights turn off so they can address the problem with a click, or do they want the system to regulate itself?” As another example, she offers, “We hear couples say, ‘I’m always cold but he’s always hot and we’re trying to sleep in the same room together,’ so we’ll work to find a compromise where one part of the house is warmer and another is cooler.” Bottom line, “We’re just focused on what drives them the most insane at home.”

Using analytics to determine where families spend most of their time, or where utilities like electricity and water are being wasted obviously generates savings. Since the pandemic has more people spending much more time at home, those savings can be even more substantial, and the biggest of all potential savings may be sensors on plumbing that could burst and generate thousands of dollars in water bills before the home owner is even aware it has malfunctioned.

It may sound simple, but the key to Ella’s success may simply be in not generating more annoyance than automation is designed to solve. “You have to find what works best for each family,” Ella says. “Some people like to get the pop-up alerts on their phone that say, ‘hey, Johnny just went out the front door,’ or ‘Becky left the bathroom light on.’ Other people just want the lights to go off, they don’t want to think about it or press anything.... You also don’t want to put in a solution that forces someone to always have to call their kids or grandkids to help them figure out how to work it. We always consider how tech-savvy the person is and how much they’re willing to learn, and find a solution that will work for them.”

AIVI Global (https://www.aiviglobal.com/) offers a few generic packages using a short list of best-in-breed autonomous tools that work for most people, but is willing to customize solutions based on the lifestyles of any family.

Tools of her trade include smart locks, smart lights, smart thermostats, utility bill analysis, smart plugs, apps and sensors, and she employs specialists from HVAC technicians, plumbers and electricians to Audio-Visual and IT integrators. “Depending on what you’re interested in automating and integrating, we can pull that together for you,” she says; even if it’s as simple as configuring that Google Nest you decided to buy. “We do that all day, every day!”

Being a woman-owned business makes her more appreciative of the aesthetics of installing various forms of technology, whether it comes down to hiding cords in the installation of high-end entertainment systems, or the color of smart thermostat covers. With her characteristic good humor, Ella says this sensibility uniquely equips her to “un-man-cave the family room for everyone.”

Recently, she was moved by the impact her company had on an older customer’s personal life. When he moved to a downsized living situation and bought a new, larger home entertainment system, she asked him if he wanted them to install Alexa voice commands. He didn’t think he’d use them, but said, “Sure, go ahead.”

The week following, he was unpacking boxes and took a tumble down the stairs, injuring his dominant arm – the same one he uses for most menial things like his TV remote. “He called us to thank us that he didn’t have to struggle to watch his favorite shows or listen to music throughout the house. He was ecstatic and said, ‘It’s a game-changer! I’m so spoiled now.’”

She’d agree about the impact of voice technology, though her own uses are as simple as turning out the lights by saying, “Good Night,” or turning off the Internet in the kid’s rooms when it’s time for bed on a school night. “Sometimes the small things can make a big difference.”