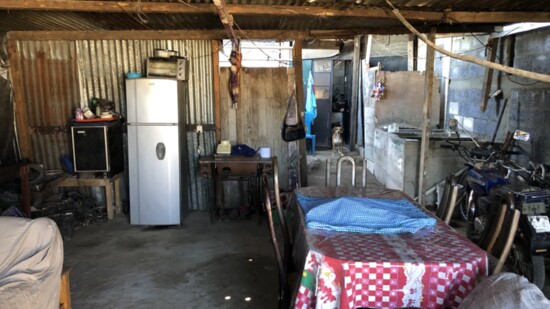 A Tale of Two Brothers...

And How Gratitude Guides the Reed's Family Vacations

This feeling of gratitude for a successful flooring business (https://novahomeworks.com/ of Sterling) and a beautiful family might seem like the norm for a Loudoun business owner. But with Daniel it’s different. While your average family of four might save up for an annual beach holiday, every vacation for the Reeds is spent, at least in part, in service to a family or a community less fortunate.

It’s a habit Daniel developed early in life. From the time he was enrolled in a nursing program out of high school in southern Michigan, he served on medical mission trips to Europe, Asia and the Caribbean. On the island of Mindoro in the Philippines with Adventist Frontier Missions of Michigan, he treated patients with malaria and tuberculosis by day, and at night he taught islanders to read. “It was a very cool experience, living in the mountains without electricity or shelter or a bathroom – literally out of doors.”

Other missions with groups of doctors followed to the far reaches of Russia where he taught rural people home remedies to counteract common diseases. By the time he traveled to Prague and the Ukraine, he was studying to be a “health lifecycle coach” and completely hooked on both travel and helping people. By 1999 he had the chance to take medical supplies to Cuba and the Dominican Republic.

There he worked to support himself, sometimes operating from donations that paid for plane fare or supplies, “but most of the time I worked and used my money to support the work.... My mom used to say if you hadn’t gone so much you’d be a very wealthy man! But of course this was all before I got married,” he smiled.

Not that that changed much. After he and Lezlie married in 2001, Daniel began building his flooring business, a trade that had been putting him through nursing school until his great chemistry with customers caused his employers to pull him into the business full time. Along came son Joshua, now 13, and Kyleigh, 10. Now, wherever they travel – often to Lezlie’s native Mexico – the kids take clothing, toys and crafts for kids they meet on their journey. One such trip took them to San Telmo where the families live near the town dump.

“When we vacation in Mexico, we always do some sort of community work while we’re there,” says Daniel. On their last trip they bought rice, beans, oil and other staples and took the supplies to communities where handicapped families live. The connection came through relatives of Daniel’s fellow church members in Haymarket who work with handicapped parents south of the border. “We made around 25 baskets of food and toys and so forth and took them around to the families in these little shacks where they were living.” They also collected money for an 80-year-old woman living in a “little plastic house” to build her a better place to live.

The kids enjoy the work. Daniel says, but it’s an education too. “I want them to learn. I came from a very poor situation and, while my kids have been very well blessed, I want them to understand the humble people and how they live. That’s all I’m trying to help them understand.”

Saying Daniel came from poverty is no exaggeration. He was born in Guatemala to a single mother of five kids who died at 29 from a lung condition brought on by working in a fireworks factory where no masks were provided to prevent workers from breathing in the gunpowder. Abandoned by their father, he and his siblings were taken to an orphanage where Daniel, the second oldest, helped to look after the others. Not long after, he and three brothers, now aged 12, 11, 7 and 5 – all but the youngest – were adopted by Christian parents in South Haven, Michigan.

Daniel clearly remembers the trip to his new home, passing through O’Hare airport the day before Thanksgiving. They arrived late to the modest home on a day Daniel is sure was the coldest he’d ever experienced, then roused Thanksgiving morning to an astonishing amount of food, including apple pie. After eating their fill, all went to work, chopping wood and doing other household chores in a manner habitual to his new, hard-working parents. Not rich by any means, the couple nevertheless struggled to take in as many siblings as they could afford. The normal cost to adopt each child was $10,000, but the orphanage cut the price in half, leading Daniel to chuckle that he always teased his mother that she got him “50% off.”

He and his brothers were home schooled at a time before it was fashionable and he learned cabinet-making and wood-working from his father and to speak English by his mother – who didn’t then speak a word of Spanish. Because the family had a horse, the boys learned to plow fields “the old way” and to grow their own food. As his father branched into contracting, so did the boys, causing Daniel to remark that remodeling is “in the blood.” At 75, his dad is even now building a new house, doing everything himself.

So, it’s not surprising that Daniel would do the same for his youngest half-brother, the one who wasn’t adopted.

It took years of searching and finally a trip with his wife back to the Guatemalan city where Daniel was born to find his half-brother William Sinay, but they did. Without benefit of a life in the U.S., William grew up in the slums and only went to school through the third grade. He, his wife Patty and four kids aged 8 to 15 lived simply in a tin and cardboard hut with dirt floors. Daniel and his wife immediately helped them move into a rental house and began, little by little, to build them a small home of their own.

The new home isn’t big, but will have two levels with three small bedrooms, a small kitchen and living room with concrete foundation. The next step: getting a roof over the kitchen and living room. Proudly, Daniel notes that, though they live in very humble circumstances, William has always made sure the kids go to school.

“What I tell our staff here, who are also involved in these projects,” Daniel says, "is that we are of course here for business, and the Lord has blessed our business, but we’re also here to be a blessing to people. We send kids to camp, and we support a school in Texas so they can buy supplies.... Faith has a lot to do with it, but it’s also that my heart just feels for these people where the need is great. I don’t want to forget where I came from.”

To Daniel, his efforts have always seemed small – nothing world-changing – “it’s just a little bit of help with this and a little bit of help with that,” but that too could be about to change. Daniel’s work in Guatemala reconnected him with the orphanage through which he and his brothers were adopted. It’s called International Children’s Care and is “dedicated to the care, education, and spiritual growth of orphaned and vulnerable children in underdeveloped countries.”

The internationally recognized non-governmental organization based in Seattle has orphanages in several countries, and a website dubbed, http://forhiskids.org. The group champions traditional Christian values like the potential of each person to reflect the image of God; the dignity of every person; and the importance of quality in human life. It helps orphaned, abandoned and needy children, typically by setting up as many as 12 children in a family-style home with two parents.

Inspired by Daniel’s story – not just by becoming successful at business, but by the lifestyle he and his family have adopted – ICC is working on a documentary that will feature his experience. Because that involves his being trained in woodworking at home and using this to forge a career, the group is looking for ways to help members of its homes learn a trade so they can become self-supporting. Daniel says, “I would be happy to go to developing countries and train folks because, it’s like you say, you can give a fish and feed someone for a day or teach them to fish and they can live for a lifetime. That’s my dream and I would love to get business people from Loudoun involved.”

ICC is on board for whatever comes together, “so we can show other people – yes, it can be done!” Daniel adds. COVID has delayed the Reed’s vacation for this year, likely until December when they hope to help build a school in Peru.