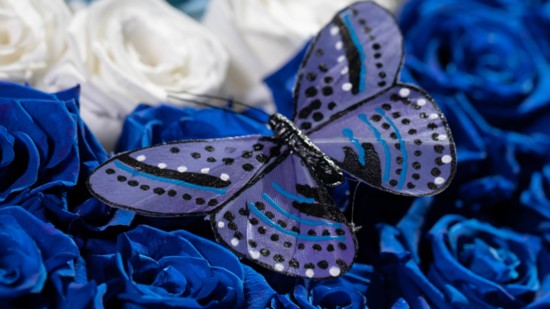 Sahar Itani grew up hearing that “with privilege comes responsibility.” She built her business around this idea, sending a percentage of profits to charities with every purchase of her meticulously handcrafted floral arrangements. That’s not the only thing that makes Fleurs Et Papillons so special. Sahar’s flowers just so happen to last years longer than those you might find at your local florist.

French for “flowers and butterflies,” Fleurs Et Papillons has been offering a unique twist on bouquets and baskets to Potomac-area residents since 2016. The blooms aren’t fake (they will eventually fall apart), but real, fresh flowers that have been chemically treated to live for one year—guaranteed—or perhaps even longer, as Sahar says some have lasted as long as three years under her care. Her most popular product is roses.

The process involves treating the petals with different oils and softeners, stripping the color completely until they’re almost translucent. Then color, any color at all, is reintroduced. The flowers lose their natural scent, but she adds rose oil, which is absorbed back into the petals. The end result is a gift that keeps on giving. The undying flowers serve as a reminder to the recipient that they also gave back to the community in some small way.

“I’ve always wanted to do charity work,” Sahar says. “But I wanted to be the only decision-maker for my business because not everyone would share my vision, and you have to have so many different people involved in a nonprofit. So I started a for-profit that helps nonprofits.”

When Fleurs Et Papillons provides the arrangements for a charity function or fundraiser, a portion of the proceeds always goes to the cause involved, such as education or cancer research. And the possibilities are endless when it comes to providing beautiful keepsakes that can be admired long after those special events and occasions are over.

“My prices may be 50% more than regular fresh flowers, but I would want people to know that they’re getting a whole year’s supply in one purchase,” she says. “And your money is going to help people who need it instead of a store. A lot of people need help. Charities always need donations. This is a nice way to give back.”

Fleurs Et Papillons does not have a storefront yet, but look for their pop-up shop in Tysons Galleria this holiday season. To shop arrangements and more, visit FleursPapillons.com.