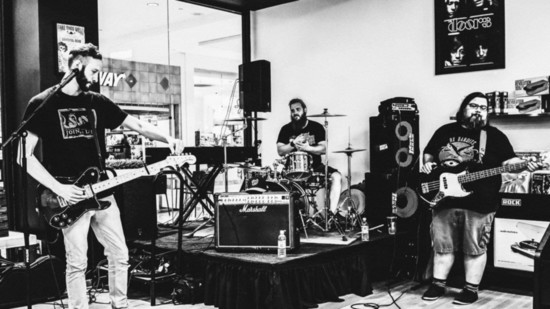 Going OUT. It’s one of the central pleasures of life in Loudoun County and by the time you’re reading this it will have been denied us since St. Patrick’s Day. You could catch the occasional Scotty Puckett live performance on Liquid Loudoun Online’s Facebook page, or stream Will Shepard live from Harpers Ferry Brewing on a Friday night. Folk singer Andrew McKnight managed to release his album Treasures in my Chest, and celebrated with a ticketed “Live from My Living Room” online concert on May 1st.

That we’d happily an online cover is a tribute to how hungry we are for escape. Those of us going to church on YouTube are now thoroughly schooled on how to get the full stereo treatment through our connected TVs, and even Sir Elton John has dignified the living room set. But it’s no substitute for the live LoCo soundtrack.

If we can find détente with social distancing, our summer music fare could blossom with everything from reggae festivals to blues, jazz, Latin and country music, and the Loudoun Symphony Orchestra.

Here’s a sample of what we’re looking forward to.

Jazz?  Yes, we have jazz. Local recording and performing artist Caleb Nei is an accomplished jazz pianist who can often be found playing in and around Loudoun County, as well as throughout the D.C. region.

Caleb started his music career playing piano for his church growing up in Indiana. He says he discovered Jazz while studying music at Huntington University and never looked back.  He’s been playing and recording jazz and piano music for more than 20 years.

For several years, Caleb played at a piano bar on the weekends in Winchester, where he developed a local following. More recently, he’s been part of a number of higher profile music festivals and concert series. Caleb is in especially high demand during the holidays and is typically booked solid at venues like National Harbor.

His latest project, Luxuriant, has him excited. “It’s a series of recordings of ambient, electronic and neo-classical instrumental pieces that can be used and incorporated into other projects, whether it’s background music for another artist, or for television, film or commercial scoring. I’ve been uploading a lot of music on music streaming services and it’s been picking up a lot of steam.”

He and his wife both are music teachers and Caleb is the volunteer music director for his church. “I hope people discover how much good is going on with music education in Loudoun, especially in the middle schools and high schools.  Between the schools and the local university music programs and the military bands, we are blessed with a bounty of very high-caliber musicians.”

Catch Caleb at Lightfoot Restaurant, Travinia Italian Kitchen or at any number of jazz and music festivals, or check his website: https://calebneijazz.com/venues. And, in the meantime, click the QR code for a Luxurant listen, http://www.luxuriantmusic.com.

Mash up hard rock, gospel, folk and outlaw country and you get Max Reading and the Dogwood Gospel. Max spent years blasting out heavy metal music, but grew dissatisfied. Living in Falls Church he found it increasingly “political” to try to find gigs and was looking to grow.

In 2017, he connected with Loudoun-based drummer Kyle Jackson through Facebook. With the addition of Kyle’s childhood friend, bass guitarist Vic Alvarenga, the band began cutting their teeth on open mic nights. Soon, they landed gigs around Loudoun County, playing largely for friends and family.

That all changed after a battle-of-the-bands competition in Alexandria led to an offer to record. A local producer donated some free studio time so they could record their first original song, “Old Friends.” Just as they were picking up steam, the Coronavirus hit. It “really caught us at the worst time.”

They’ve used their down-time work on a full album, which they hope to release later this year at which point, “We’ll play anywhere and everywhere!” Max said.

Check out https://dogwoodgospel.com for their latest gigs.

Remember when Country Music used to sound like country music?  Once upon a time, C&W music was proudly unglamorous, and here in LoCo, you can still find the real thing. Stephen Wade Crounse has been keeping the spirit of country alive for 35 years with his rich baritone voice and his twangy guitar. He says, “Authenticity is the separator for Good Old Country. Anyone can sing a Johnny Cash song and a lot of people do, but I show up ... ready to bring folks back to a simpler time in life – to rediscover the love of classic country artistry.”

He loves the Loudoun Music Scene for its artistic collaboration. “I perform as a solo artist and play bass for the Willie White Band, so you never know who will show up at a gig and we regularly end up inviting artists to sit in with us at venues.” As a veteran he also likes to give back to other veterans. “I think it’s really important to serve others before serving myself, a trait I learned in the U.S. Army.”