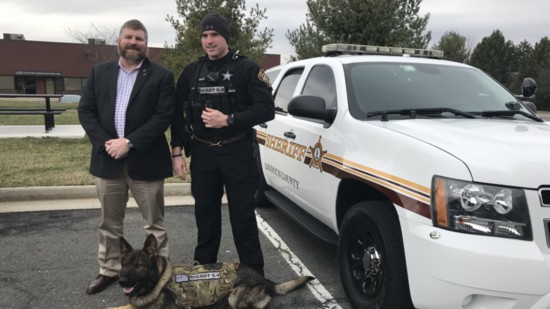 In 2010, Shawn Mitchell joined the ranks of people who had a dream to start a business and do it better than the rest. Modern Mechanical began in the basement of Mitchell’s Ashburn home. Shawn and his wife Ashley had just bought a house, had their first child and decided Ashley would stay home when Shawn went out on a limb. “It wasn’t the most glamorous office space,” Shawn jokes, “but at least the commute was good!”

Shawn soon grew Modern Mechanical into one of Loudoun’s largest and most respected providers of residential and commercial mechanical services. He decided to specialize on heating and air conditioning and plumbing throughout Northern Virginia and made it his mission to deliver those services as quickly as possible to differentiate his services.

An opportunity for major expansion arose in 2016 when he joined the Direct Energy franchise family and was able to grow his business to an even greater extent. Now, his business offers HVAC services, plumbing, electrical, solar-energy solutions, and industrial services through its franchise brands: One Hour Heating & Air Conditioning, Benjamin Franklin Plumbing, and Mister Sparky Electrical. Modern Mechanical’s customer base grew to 55 employees and now supports a fleet of 31 yellow, blue and red vans.

“We represent one-stop shopping for professional home services in Loudoun County,” Shawn boasts. “We’re proud to say that 'one call does it all.' We love working with area realtors and property managers because they simply make one call and we can dispatch all three services to a single home in no time at all, with simplified billing to go along with that.”

With rapid growth came the accolades. Just one year in business, Modern Mechanical earned the Loudoun Chamber of Commerce’s Service Business of the Year award in 2011. In 2012, the Washington Business Journal named the company Number One Small-Sized Business in its 50 Best Places to Work; 2013, Loudoun Chamber of Commerce, Entrepreneur of the Year;  2014 and 2015, ranked by Inc. Magazine among the nation’s fastest-growing private companies; 2016, honored by the United States Chamber of Commerce as a blue-ribbon finalist for the Dream Big Award; 2017, the Washington Business Journal added the title second-best Medium-Sized Business; and 2019, it made the Top Ten Largest Mechanical Contractor list in the Greater D.C. area, and the list goes on.

No ‘Glory Wall,’ Just a Big Box of Bras

And yet, inside the Ashburn headquarters of this expansive operation, in place of a “glory wall,” you’ll find a large box to collect gently used bras for “FreeTheGirls.org,” a non-profit that collects bras from all over the world to help girls rescued from sex trafficking live a life of freedom by selling Western undergarments. On February 25th, bras collected all year from Modern Mechanical, Club Pilates and Best Rack Around will find their way to a Fat Tuesday / “Mardi Bras” celebration at Bar Louie. “I could talk for hours about it,” Shawn says, “and my wife enjoys it too. You help a lot of people you’ll never meet just by sharing something you’ll never wear.”

A little closer to home, Shawn supports Backpack Buddies Foundation of Loudoun (https://www.bbfloudoun.org/), an organization set up to help the one in four school children in Loudoun County coping with childhood hunger. As he explains, the group packs food for kids who rely on the school lunch program for essential nourishment into backpacks for them to eat over the weekend and on school breaks. “Childhood hunger is devastating to me because I’ve been hungry,” explains the service-disabled combat veteran. While serving in an Army engineering corps in Iraq, his unit was attacked by a suicide bomber who blew up the chow hall, killing some of Shawn’s own buddies.

“After the MRE’s (meals ready to eat) ran out, we had about a month when we were running full ops all day on two baloney sandwiches as our full calorie intake. I was seriously hungry – that’s probably why I’m kind of a big guy now,” he quips. “Knowing how it feels means you can’t stomach the idea of kids going hungry in the wealthiest county in the nation.”

He’s a self-described “animal guy,” too, so when the Loudoun Sheriff’s Department asked if he could find funds for a bullet-proof vest for a new canine trooper, he immediately said, “yes!” Again harkening back to his Army days, he says, “I learned to arc weld in Iraq, putting protective plates on a 5-ton dump truck we drove around when we weren’t using the vehicles of the Stryker Brigade combat team. From that experience, you quickly learn the importance of having the right equipment.”

Supporting Loudoun Habitat for Humanity was another opportunity Shawn calls “obvious,” and this year he joined the board. He also makes supporting law enforcement, the Ashburn Volunteer and Rescue Department and other first responders a priority, and his employees have found his leadership, loyalty and selfless service contagious. When not driving their colorful trucks, many of them can be seen participating in food drives, hosting animal adoption events or tossing candy canes with the fire department in the town’s annual Christmas parade.

Oh, and he now serves as Vice Chair of the Loudoun County Chamber of Commerce Board of Directors where he mentors many area business owners. A now successful businessman told us how touched he was when Shawn’s was the first call he received when his first business failed. He has been tapped often to speak and is always willing to swap ideas with Chamber colleagues or serve on panels on how to attract new customers or hire the right people.

Any Day No-One is Shooting at Me...

Asked, “why?” he acknowledges that that the more people he knows in the community, the more are likely to become customers. Pressed, he says, “People like to do business with folks they know, like, and trust, and who share their values.” Then he adds, “It may be cliché, but you don’t realize how good you have it here in America, especially in Loudoun County.”

“Having served in Bosnia and Iraq, I am continually reminded of the freedoms we have and the opportunity we all have to make a difference in our everyday lives. No matter how bad of a day I am having, no one is shooting at me, so it’s not that bad.”

“The growth we’ve experienced has been nothing short of tremendous, and we expect to keep growing,” he says. “But while we are growing and expanding, we never lose sight of what matters. To us, giving back to the community is always a priority.”