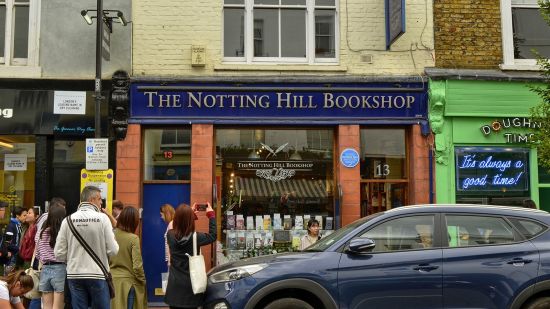 REAL BOOKSTORES THAT WERE USED AS FILMING LOCATIONS

Do you ever watch a movie and wish the places they go were real? Well, sometimes they are! Many movies use real bookstores to film scenes or recreate sets inspired by real bookshops. Check out some of these famous bookstores that have had screen time!

Located in the heart of beautiful Notting Hill, minutes from the vibrant Portobello Market is the world-famous Notting Hill Bookshop.​

The store opened in 1979 and originally specialized in travel books only. In 2011 the shop opened up to a wider audience and broadened its stock to cover most areas of publishing while still maintaining a sizeable travel section.

Another area of special focus is the children's section, housed under a charming glass roof in a cosy part of the shop. We take pride in our wide range of carefully curated titles as well as educational toys and gifts. We strongly believe in encouraging readership early and our staff is always at hand to offer advice to children and parents alike.

In 1999 the bookshop became famous after its interior had been copied in the Notting Hill film featuring Hugh Grant and Julia Roberts. Ever since the premiere we've enjoyed visits from thousands of fans of the film coming from all over the world.

READ MORE: About Us

Well, folks, it turns out the site of Joe and Beck's first fateful interaction is real, and it's located right here in NYC.

"Mooney's," as it's called in the show, is actually Logos Bookstore, a little shop in the Yorkville neighborhood of Manhattan. The exterior and front interior of the bookstore were used for filming, according to PopSugar, but no, there's no basement - at least not one with a giant glass cage. Also, ironically enough, Logos is known for their extended collection of religious texts and Bibles (if only Joe picked one up, or, you know, had one bashed into his face).

If you'd like to join fellow fans of the show in paying a visit to the infamous storefront, it's located at 1575 York Ave. Post an Instagram at your own risk - you never know who's watching.

READ MORE: THIS Is The Real NYC Bookstore Where "You" Was Filmed!

After Joel finds out that Clementine has erased him from her memory and he goes to her workplace and she doesn’t recognize him he decides to get the same procedure done. While the erasing process is underway and he is seeing the memories he has of her just before they disappear forever he realizes that he doesn’t want to go through with it. But, because he is asleep while it is happening he cannot do anything to stop it.

At first he tries to hide with Clementine in places she doesn’t belong but in the end it doesn’t work. Clementine advises Joel to just enjoy the memories as long as they are there. Finally we arrive at the bookstore scene. Joel goes looking for Clementine at her workplace after the first time they met. She sort of assumes that he is in a relationship and makes clear that she isn’t going to be the other woman.

After giving him a short but powerful speech they reminisce about how that second meeting went and Joel admits that he wishes they could do it all over again. Clementine suggest that Joel should try to find her when he wakes up after the procedure.

READ MORE: The Perfect Scene – Eternal Sunshine of the Spotless Mind – Love in the Time of Books