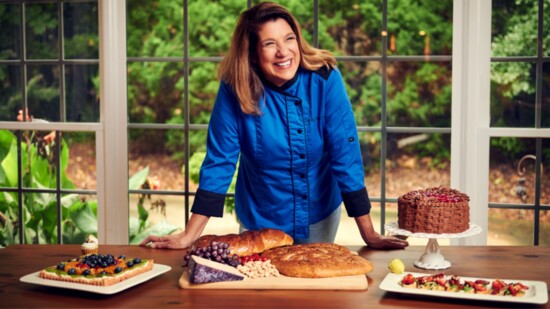 For one local chef, the art of preparing, cooking, presenting and serving food extends well beyond tantalizing the pallet. It's about the fellowship that takes place when sharing a meal with others. It's about feeding and giving, and the joy that comes from serving and seeing others enjoy your fare. Helping people expand their variety of food is an added joy, and when you're a personal chef, it becomes all that and more - unique, intimate and memorable. From the time she could operate a mixer, Chef Pauli Reep has been cooking and blessing others with what is truly her gift.

Born and raised in Ohio, and the youngest of five, Pauli paid close attention to the woman who had tremendous influence on her ability to get things done, and done well. Pauli's mother consistently modeled what it would take for her to do what she does so well - create and serve. Her mother recalls when Pauli was five years old and told to set the table for hot dogs, she pulled out her mother's prettiest little dish and put mustard on it and set it on the table. Pauli admits, "It's not a struggle. I always watched my mom. She gave me the basics and the foundation." She adds, "And yes, I just love beautiful plates and table settings. Presentation is a big deal."

In the '80s when cheese fondue and profiteroles were the party favorites, Pauli - having established a solid reputation among friends - was catering parties for friends with her own food and flair. Pauli reflects back on her high school years when she baked birthday cakes and other special occasion cakes for her friends. She graduated to making wedding cakes and believes it was the parties hosted at her home that led to requests for special dishes and ultimately her catering business. "It was not intentional, but God-given." Pauli wants God to get all the glory; not just for her culinary gift, but for everything she has. "He's given me the desire. It comes easy to me. It always has, and that's a gift."

In what Pauli believes was a divine appointment, a woman approached her at a catering event and asked, "So, what's your dream job?" Pauli didn't know the woman, but openly shared her dream of going to people's homes and cooking for them. The woman identified herself as a chef and gave Pauli a set of videos that she herself was not going to use. The videos were from the USPCA - United States Personal Chef Association. Pauli took the videos home and got really involved in the association, including joining the USPCA National Board. "It was a lovely, lovely time. I felt like the Lord just guided me and put me in the right places at the right time."

Dan, Pauli's husband of 39 years, is a huge fan and recognizes how gifted his bride is. "It's so easy for her. She doesn't understand that not many people just start baking bread, and start making a cake, or making a tart." While things come naturally to Pauli in the culinary world, she did a lot of self-study and took many cooking classes before deciding to become a personal chef. Pauli loved self-study and learning was and still is her thing. While attending college, Pauli's favorite thing was saving money so she could go to the restaurants in Chicago. Destined and divinely orchestrated, the years, lessons and experiences paved the way for Pauli to start her own personal chef business in 1999.

A year into her catering business Pauli and her family relocated to Georgia, and just a month after settling in, a friend saw an ad in USA Today about the USPCA and shared it with her. Pauli didn't waste time. She contacted The Citizen newspaper and asked if they would like a local story, and they did. An article about Chef Pauli Reep ignited Pauli's personal chef business. It was the beginning of the next layer in her journey.

It was 2005 and Pauli's husband was working for Chick-Fil-A as an engineer. When decision-makers at Chick-Fil-A learned that Pauli was a chef, they asked if she would come in to consult. Pauli agreed and started consulting on the restaurant menu. Shortly after, Pauli was asked to consult on the photoshoots. Again Pauli agreed and after four years of doing photoshoots for Chick-Fil-A, she was asked to be the menu developer for the Dwarf Houses. Chef Pauli agreed to the opportunity, and that's when recipes like the yummy, creamy macaroni and cheese, the tortilla soup, and the sweet potato souffle were created. Slowly her personal chef business started to wane and Pauli went to work full-time for Chick-Fil-A as the Recipe Consultant - developing recipes for some of the tasty food many of us enjoy today.

Pauli was doing what she loved at Chick-Fil-A, and continued to until May 2018 when she made the decision to leave for something much more delicious - being Gigi to her five grandchildren - two are age 5, and the others are ages 4, 3, and 18 months. "It's been the best job ever." Gigi's blessings continue with a sixth grandchild expected to arrive in January. Cooking and baking with her grandchildren are what fills Pauli's heart. Well, that and service to others.

Today, Pauli does a lot for her church. It's her ministry now and she loves it. She loves feeding people. Giving them good food and making them feel loved and well-cared for. It matters to Pauli that the people she feeds feel special. "I want to minister to people for God's glory." She doesn't know where that's going to take her. She believes God will show her what's next. "I don't want to work anymore. I want to serve. I don't have to search for it. He'll show me."

For anyone considering a career as a chef, Pauli suggests getting involved in the USPCA. "They are a great association - still helping chefs, whether personal or corporate." Pauli acknowledges that culinary school is expensive, and encourages anyone considering it to make sure they have a love and desire for what it entails and what comes with it. "If you have a desire and want to learn more, culinary school is great. Go get the knowledge because you need all those skills." Pauli understands the love for cooking, but she would caution anyone with the mindset of going into culinary school to become a chef on Food Network. It doesn't work that way. The motivation should be a love and passion for what you're doing. "Truett Cathy would always say, 'If you love what you're doing, you'll never work a day in your life.'" Pauli couldn't agree more.