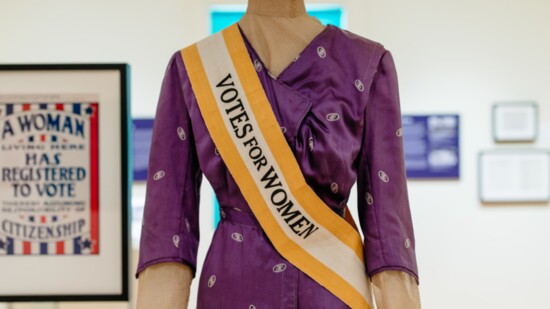 The fight for women’s suffrage in the United States is often discussed using a few national names, like Elizabeth Cady Stanton, Lucretia Mott, and Susan B. Anthony, and as something that is neatly wrapped up with the 1920 adoption of the 19th Amendment.

Like most of history, the full story is not so simple.

The movement for women’s suffrage and ability to exercise that right happened locally and ebbed and flowed in tandem with other movements.

Additionally, “women” did not mean “all women,” and frequently excluded Black, Indigenous, immigrant, and women of color. Many women would not have their constitutional rights protected and recognized until decades later.

Despite not having access to the vote, women advocated for causes including anti-lynching, child labor reform, temperance, and others. The vote was a way to advance those specific causes.

Two Atlanta women embody the differing experiences of women seeking voting rights. Emily MacDougald was the mother of Emily Inman, who later owned Swan House in Buckhead and attended suffrage events alongside her mother. MacDougald helped found the Equal Suffrage Party of Georgia in 1914. The group succeeded in persuading the Democratic Party to allow women to vote in the Democratic white primary.

Another woman connected to Swan House who advocated for equal rights was Elizabeth McDuffie, a former maid for the Inman family who moved to Washington, DC to work for President Franklin Delano Roosevelt’s White House. She served as a liaison between First Lady Eleanor Roosevelt and civil rights activists, while also participating in civic organizations to advance rights for African American and service workers.

These Atlanta women are but two examples of the millions of people who fought not only for the nineteenth amendment but for its application to all women in the United States. Even today, women continue to run for office, advocate and organize to make democracy fairer and more equitable for all.

To learn more, visit Any Great Change: The Centennial of the Nineteenth Amendment at Atlanta History Center. Tickets and information at  AtlantaHistoryCenter.com or 404.814.4000.