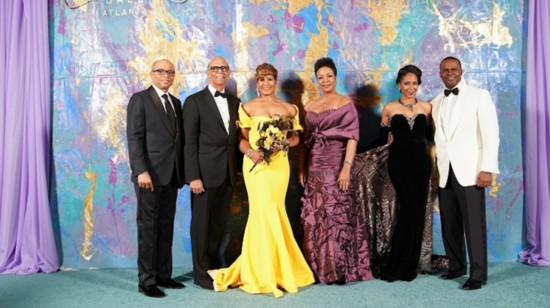 The United Negro College Fund believes every young person has a right to a high-quality education. In an era when many colleges enroll 30,000, 40,000 and even 50,000 people, students at UNCF-member historically black colleges and universities choose to get an education and prepare for the future on close-knit campuses with several hundred or a few thousand students—and pay tuition that average 26 percent less than comparable institutions. And there’s nothing small about the work UNCF HBCUs do to prolong and improve the lives of those in their communities across the country and around the world.

UNCF does this in three ways: 1) awarding more than 10,000 scholarships, worth more than $100 million, annually; 2) providing financial support to 37 historically black colleges and universities; and 3) serving as the nation's leading advocate for the importance of minority education and community engagement.

UNCF Atlanta’s Mayor’s Masked Ball is a premier UNCF gala and is typically the largest, most high-profile event focusing on raising awareness of the need and benefits of a college education, the students UNCF serves and the contributions of historically black colleges and universities. Founded 35 years ago in 1984 by retired UNCF Vice-President Mrs. Billye Suber Aaron and former member of Congress, mayor of Atlanta and U.S. ambassador to the United Nations, Andrew Young, and hosted by a diverse group of corporate sponsors, local businesses and professional organizations, the Mayor’s Masked Ball is an evening of celebration attended by national celebrities, civic leaders, alumni, dignitaries, volunteers and friends of UNCF.

Today, the Atlanta Mayor’s Masked Ball is one of 17 Mayor’s Masked Balls held annually throughout the country. It is led by Justine Normal Boyd, regional development director for the Atlanta Region of UNCF, overseeing the development initiatives of six states which support 25 HBCUs. Prior to joining UNCF, Boyd served as CEO of the YWCA of Greater Atlanta and has more than 17 years of executive leadership experience in nonprofit management, government administration and external affairs.

For the past two years, the Atlanta Mayor’s Ball has raised $1.3 million and netted over $1 million to help students attend college. This is no small feat and requires extensive relationship building, hard-work and persistence.

The Mayor’s Masked Ball includes elegant dining, recognition of corporate and civic leaders, silent and live auctions, dancing and live entertainment. MASKED is an acronym for Mankind Assisting Students Kindle Educational Dreams. This year, the ball is hosted by Atlanta Mayor Kecia Lance Bottom, and the recipients of the MASKED award are the three co-chairs of last year’s ball: Mr. Rodney Bullard, vice president of community affairs at Chick-fil-A, Inc. and executive director of the Chick-fil-A Foundation; Ted Blum, managing shareholder of Greenberg Traurig's Atlanta office and chair of the firm's Atlanta Corporate and Securities Practice; and Wendy Stewart, president of Atlanta Market Bank of America.

The event is always an exciting and edifying experience for the 1,200 to 1,300 guests and provides a wonderful way to support the organization’s mission to help students get to and through college. Moreover, the evening reminds all in attendance that “A mind is a terrible thing to waste, but a wonderful thing to invest in.”