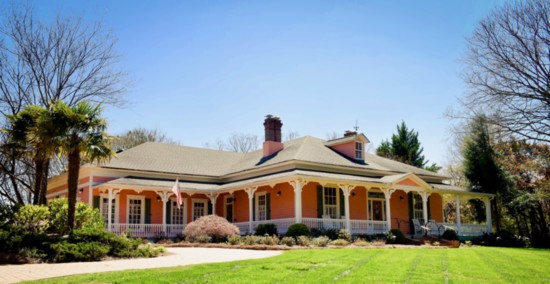 Boxwood Cottage, following thoughtful renovation by its current owner, Irene Croft, is now showing its prettiest face in 178 years in a guided tour conducted by the Friends of the Covered Bridge Historic District.

A prominent landmark in the Greater Atlanta area, the former Gann House, Smyrna’s oldest extant residence, was constructed in 1841 by Captain John Gann, Cobb County’s first state senator. Boxwood’s early history was almost its final chapter. In the first week of July 1864, it was commandeered as quarters for Union officers just prior to the Battle of Atlanta. Executing the punitive “razed earth” policy of Gen. William T. Sherman, the officers torched the house as they were preparing to depart.

Gann family lore relates that a superior officer galloping by on his horse spotted a Masonic banner being waved from a window and immediately ordered the flames extinguished. The house—and old Capt. Gann in his wooden wheelchair—survived Sherman’s merciless March to the Sea. Scorched timbers atop the stone foundations were discovered during the recent restoration work marking the transition of historic Gann House into elegant Boxwood Cottage.

Plans for Boxwood’s restoration and new addition were orchestrated from across a continent and ocean from Hawaii where Irene, an Atlanta transplant and pioneer flipper of vintage properties, resided for three decades. There she devoted two years via email correspondence and internet searches to accomplish all the advance logistics required for the challenge, from selecting a simpatico architect and contractor to choosing materials and finishes to sourcing appliances and fixtures.

In an extensive year-long roof-to-cellar makeover performed by the master craftsmen of CopperSky Renovations, the original rooms of the house, with their classic 12-foot ceilings, heart pine floors, working fireplaces and walk-out windows, were retained, as were the fanciful Victorian trims installed in the 1870s. Newer, less compatible sections, added through the years, were replaced with a 2,000-square-foot addition to blend seamlessly with the earliest construction.

The driveway as well as grounds and gardens—distinguished by palm trees in homage to Hawaii—were totally revamped to complement the residence. Every detail, inside and out, was custom-designed to reflect the owner’s eclectic taste, to display uncommon arts and artifacts collected from every corner of the planet, and to refine a local treasure of our Concord Covered Bridge Historic District into an exquisite “highly livable work of art.”

Boxwood Cottage has emerged from its lengthy metamorphosis with a fresh, polished look to grace its authentic early 19th-century origins.

Tour the Boxwood Cottage and other historic homes in the Concord Covered Bridge Historic District. Tickets available at ConcordCoveredBridge.org/tourofhomes.