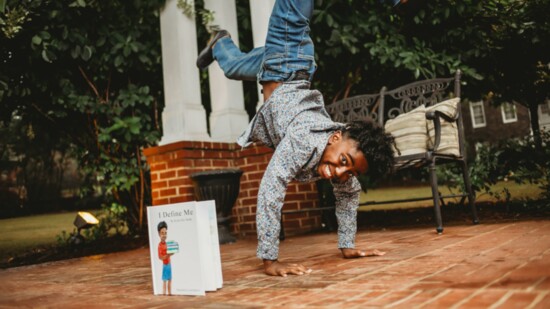 Lessons we can learn from a young author

Swiping through old videos on her phone, Ericka Smith landed on one that caused her to pause. It featured her son, Kyler speaking directly into the camera, eyes wide open addressing the world. “It was basically a PSA. He was saying how you can do anything you set your mind to and naming Dyslexics including Winnie the Pooh,” says the Smyrna mom. “He shared a story about a Dyslexic author who visited his school talking about reading. His confidence and joy were amazing.” Ericka asked Kyler if he wanted to turn his thoughts into a book and share it with the world. He was elated and his book journey began.

Last year, during National Dyslexia Awareness month, Kyler Eric Smith, age nine, released his book, “I Define Me,” an autobiographical children’s book to empower students with learning differences and their parents by providing a candid peek into his life. The book (available on Amazon and wherever you buy your books locallly) offers a unique opportunity to walk in the shoes of a bright, articulate and multi-talented child who has been diagnosed with dyslexia, dysgraphia and dyspraxia.

Rather than seeing these learning differences as obstacles. Kyler sees them as challenges that through hard work, tenacity and the right support system, can be overcome.

Following the release of his book, Kyler began sharing his story at schools and community events, and book signings. Along the way, they met other adults and parents who had either struggled themselves or had children who were struggling with learning differences. “We were able to advocate with his school and Decoding Dyslexia in support of Senate Bill 48, the Dyslexia early screening bill. Like everything his advocacy and book signing were cut short with due COVID,” says Ericka.

Kyler’s enthusiasm and gumption is evident in the book and in all he does.

And, the apple hasn’t fallen far from the tree.

Ericka and xx are both from California met at Clark Atlanta University. After they married, they settled on a home in Smyrna/Vinings. Now they have two sons. Kyler is 10 and xx is 14. XX is owner of owner/CEO of K3 Hauling & Grading a company that specializes in hauling, grading, masonry, landscaping, and in other areas of construction.

Ericka is as an early education advocate and is involved in advocating for human and sex trafficking and is a member of The Junior League of Atlanta where she serves as liaison for PAACT (Promise All Atlanta Children Thrive), a GEEARS (Georgia Early Education Alliance for Ready Students) initiative. Ericka recently founded a non-profit, I Define Me Transcending Learning Differences.  “What I have learned over the past four years is that people rarely discuss learning differences or disabilities. Once I started talking with people openly, several mentioned their struggles or their children struggles, I want I Define Me Transcending Learning Differences to help de-stigmatize LD's. Let's talk about, let share resources, accommodations, strategies,” says Ericka. “There are so many great people with Learning Differences: Bill Gates, Whoopi Goldberg, Damon John, Kevin O'Leary, Walt Disney, Steven Jobs and Danny Glover. They persevered and have done better than most of their peers despite the challenges.”

The Smiths do find time to unwind together and explore Smyrna.

“I love so much about living here - from the Silver Comet trail to the boutiques, coffee shops and restaurants with the proximity to downtown and 285, I can't imagine living anywhere else,” says Ericka. “It's been a great place to raise children, awesome community parks, trampoline parks, art school and Food Truck Tuesdays. Both of my boys have played sports in Smyrna since they were 3. The Smyrna Community Center and City of Smyrna offers great programs. We look forward to the Jonquil festival and taste of Smyrna annually. We love it here.”
We can’t wait to see what’s next for this dynamic, engaging family!