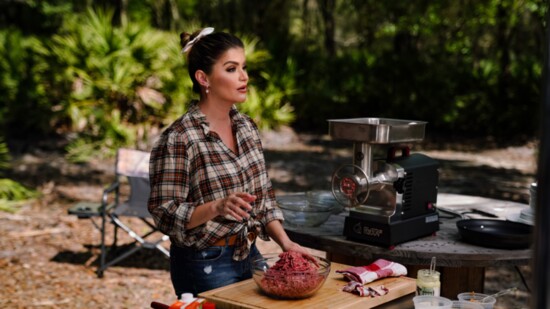 Have you ever dreamed of finding the right career that makes your heart sing with joy? One that nourishes your soul and allows for adventure and excitement? One chef effectively transformed her workdays after some serious self-revelation. Meet Chef Bri Van Scotter, not only a chef but hunter, forager and author.

After discovering her love for cake as a young girl, Van Scotter was intrigued. Instead of begging for that last piece of cake, she was hungry for the science behind how that cake was made. She purchased her first cookbook in high school, one that was filled with cake recipes. This jump-started a lifelong love for food, earning her a degree from The Culinary Institute in Napa in Culinary Arts and later, a Pastry degree. For the last 13 years, she has used these degrees and experiences as a professional chef. Van Scotter spent time researching food and what exactly she was serving her customers. After learning more about factory-farmed animals, she was shocked by the number of processed foods, GMO’s and chemicals. This drove her to harvest protein herself, thus, she has been hunting and foraging for about 9 years now.

Her business, Wilderness to Table, was launched 8 years ago with the sole mission to showcase wild game in a relatable light. “I want to show people that there is more to wild game than just grilling a backstrap,” Van Scotter explains. “It’s also my mission to break the stigma of hunters and showcase the beauty of hunting for your own food. That has since morphed into inspiring other females to start hunting as well.” She began bowhunting and quickly jumped into rifle hunting, spearfishing and fly fishing all over the world. Her desire to make delicious meals led her to search recipes on the internet where she was greatly let down. “I felt as though this beautiful meat deserved to be eaten in more beautiful ways to really do it justice.” This desire encouraged her blog, Wilderness To Table, where she showcases wild game recipes for the everyday person. Her hard work and dedication to wild game launched her business, Wilderness To Table, to incredible heights.

Knowing exactly where your food comes from is a passion of Van Scotter’s. When hunting in the wild, she knows the habitat of the animal and the diet of the animal. “I fill my freezer with self harvested meat from animals that had a beautiful life free of human hands, a life that all animals should have.” She’s also breaking the stigma around wild game. “If you know how to process and cook it right, it’s the best tasting meat on earth." While the taste and knowledge around the animal may be unfamiliar, the dishes themselves are filled with vitamins and minerals. These animals live an active lifestyle, keeping their meat lean and all-natural. Her adventures have been vast. A grand experience for her was freediving to locate the most unique and beautiful creatures. A favorite memory of hers, taking her harvest in Namibia to an orphanage and donating the meat to the children.

Sharing her passions for the outdoors, gathering meat and providing well-rounded recipes landed her right on the doorstep of Amazon Prime, where they host her very first television show, Wilderness To Table. Season 1 can be viewed on Amazon where you can cook alongside Van Scotter as she shares real-life hunting stories. Season 2 of Wilderness To Table will debut at the end of summer 2021 and it takes you on some wild adventures. Van Scotter is thrilled with this season. “This season is freaking awesome, you see me hunt, butcher and cook. You see the whole process, the adventure, my goofiness, and I cook my wild game right there outside at hunt camp.” Follow her on social media for more details on when and where to view Season 2. She gets her first alligator and tackles a wild hog. This season gives you a glimpse into Van Scotter’s personality and antics, her passion runs wild as we watch her do what she loves the most.

In addition to her show on Prime, Van Scotter has released two cookbooks. Her first book, Complete Wild Game Cookbook: 190+ Recipes for Hunters and Anglers, encompasses all wild game from venison to bear, waterfowl, upland game, fish, rabbit and even squirrel. Her second cookbook is for the venison lover. The Easy Venison Cookbook showcases simple venison recipes that you can make every day. “I wanted to show people that venison is not just for a special occasion, you can use the meat in everyday cooking and it can be super easy too.”

Van Scotter is a wife, mother and avid dog lover. Her German Shorthaired Pointer, Remi, is almost as popular as her mom. They are best friends who hunt together. She joined her in getting her first pheasant. “Ohhh it was simply the best thing in the world to have built this relationship with your dog and when it all came together it was the best thing ever.” It’s her mission to show not only her daughter but women everywhere, that you can follow your dreams. “Any Fayette women out there who might want to start hunting, I’m local and happy to help them along in their journey.”

by Chef Bri Van Scotter for Wilderness to Table

In a blender, combine all the ingredients except the venison.

In a saucepot combine all the ingredients except the Daikon. Bring it to a boil and remove from heat. Let the mixture cool to about 90 degrees, and then add the daikon sticks. Let set for 30 minutes to 1 hour.

In a small bowl whisk all the ingredients together.