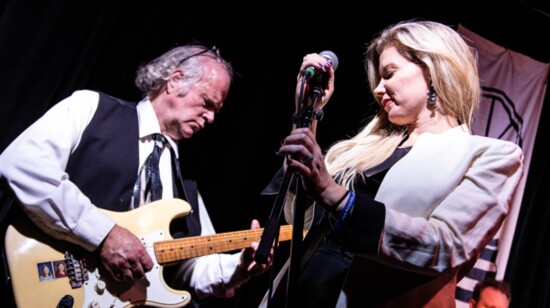 Love for music shines through her vocals, stage presence and industry expertise.

Her vocals are filled with emotion as she breathes intimacy into every song she sings. She’s blended her voice with many legends and continues to make waves through her performances. Megan Campbell is a freelance singer and recording vocalist who conquers any microphone that calls her. We joined Campbell in her Peachtree City home where she allowed us to step into her shoes and experience life as a freelance singer.

How did you find music?

I’m not sure anyone gets “placed” into music…it’s either in your DNA or it’s not. I grew up in a very musical household where my daddy used to blare his LPs and play guitar 24/7. The first real musical memories are in my dad’s music room listening to everything from Buddy Holly to The Kinks to The Beatles to The Bangles to The Who. My dad was a school teacher by day, and a rock and roll king/local celebrity by night. He was and still is widely known as a legendary guitarist. He played gigs probably 3-4 nights a week. When I was 8, I finally joined him on stage for the first time in a little dive bar in Sumter, SC. That actually became a weekly gig for me after that. I would make $80-$100 in tips every Thursday. He will always be my favorite duo partner.

I sang with Charles Kelley and Darius Rucker at a sold-out Ryman Auditorium, and it wasn’t until I saw a picture weeks later where the awe of that moment hit me. I frequently sing with Edwin McCain and while I call him a close friend, there are still times I remind him that ‘I’ll Be’ was mine and my boyfriend’s song in 7th grade.

Which musician do you admire?

There were plenty of artist influences along the way who motivated me… Patsy Kline, Reba McEntire, Stevie Nicks, Roseanne Cash, Trisha Yearwood, Emmylou Harris, and Linda Ronstadt. All for different reasons. But, if I had to choose one, it would be Aretha Franklin. I had my oldest daughter when I was sixteen and there were times I thought I would have to give up music. Remembering that Aretha took her children on her tours kept me from throwing in the towel many times.

Describe the music you create.

For me, adding my unique vocals to anything, whether it be a melody or someone else’s voice, is an art. I perform best when connected to the song, this could be a rhythm, a lyric, or a feeling. Typically, the song is a story that tells you how it wants to be told. Being on a stage is the most natural thing I do next to breathing. Music is about truth. When I’m on stage, I try my best to remember there’s no one else like me and to embrace that in my delivery to the audience.

What is your favorite song to perform?

It’s constantly changing, but the one I get the most requests for is Angel from Montgomery by John Prine. Like thousands of others, I’ve been covering that song from a very young age. I’ve always connected naturally and deeply to the lyrics. No one really put words together to form a story like John Prine. It was tragic to lose him to Covid this past year.

How do you connect with your fans?

Fans have come up to me and said, “you’ve had heartbreak in your life, haven’t you? So have I.” I lost my brother in 2008, he was 25. It changed the way I sing forever. A lot of people use music to grieve and heal, it’s euphoric to know my listeners receive the intended emotion of a song.

Where in the Atlanta area have you performed?

Eddie’s Attic is a favorite venue and I’m there at least twice a year. And being a member of The Mike Veal Band, a Georgia-born band, has exposed me to many venues in Atlanta. I also accidentally turned my backyard into a music venue. I host two to three drunken singer/songwriter rounds a year.

Where are your next performances?

A lot of shows are popping up that are reschedules from Covid. Everyone in the music industry is trying to get back to a sense of normalcy as far as gigs go. So the schedule is nothing close to what it has been for my entire career, but I at least have some of the regularly scheduled events still happening in some form. The next one that comes to mind would be the Caddyshack golf tournament in St. Augustine. I’ve been playing gigs for Bill Murray and his brothers (Murray Bros. Inc.) for years. Studio sessions have become the norm and taken the place of a lot of gigs during the pandemic, too.

Eddie’s Attic in Decatur on November 12th and 13th.