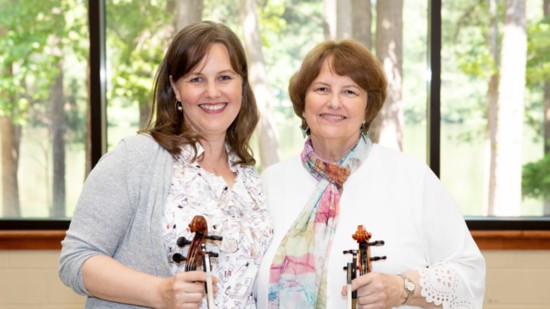 Famous mother-daughter combinations aren’t rare. Think Anne Boleyn and her daughter Queen Elizabeth I, Mary Wollstonecraft and daughter Mary Shelley (Frankenstein author) or, more recently, Judy Garland and daughter Liza Minnelli.  But northside Atlanta has a notable pair of its own, who are making a powerful impact on the city’s classical music scene.

Love for chamber music led Ronda to found Franklin Pond almost 20 years ago.  The program began with just four string quartets of students practicing at her home on Franklin Pond Road.  Two quartets were assigned to bedrooms, another to the living room, and the fourth to the porch – when it wasn’t raining.  The sixteen students were coached by professional musicians from the Atlanta Symphony, with occasional guest artists leading master classes.

Rhonda’s idea met with enthusiastic reception from the young musicians.  Franklin Pond grew dramatically into a year-around program with regular public recitals and an expanding team of professional musicians, plus 4-day retreat at Jekyll Island.

Because chamber music is composed for a small ensemble of instruments playing together in an intimate setting, usually without a conductor, it offers young musicians the fellowship of practicing and performing with others without stepping into the formality and intimidation of a full orchestra.  It requires immediate communication with other players and with the audience, presenting opportunities for leadership, cooperation and inspiration.

Ronda’s daughter Ginny is now a key part of Franklin Pond Chamber Music, administering its diverse activities under the supervision of a board of 15 devoted music lovers from the Atlanta community.  She’s currently absorbed in details for hosting Franklin Pond’s most dramatic and high-profile activity:  The Third Annual Franklin Pond Chamber Music Competition.  This year’s competition, open to all young Georgia chamber music groups, is scheduled for Memorial Day weekend at Spivey Hall, the Atlanta-area chamber music mecca.  An international panel of prominent judges will select the recipients for cash prizes in multiple categories.  Young musicians take note!

Hundreds of young people from the Atlanta area have participated in FPCM’s programs.  Amazingly, half of them have gone on to study music in college or graduate school, and numerous participants have chosen music-making for their life work.

“Franklin Pond  made me be a musician!” one young musician explained recently.  “Playing chamber music is a great human exercise. It allows you to have a distinct voice, while it teaches you to listen to the other players around you.  It inspires you to do your best.  Most chamber music study programs are for older people, but Ronda and Franklin Pond want to instill these values in younger kids.  They’re right--you’re hooked for a lifetime of making music with other music-lovers.”

A talented mother-daughter duo ensures that this exciting experience is available to Atlanta’s talented young musicians.