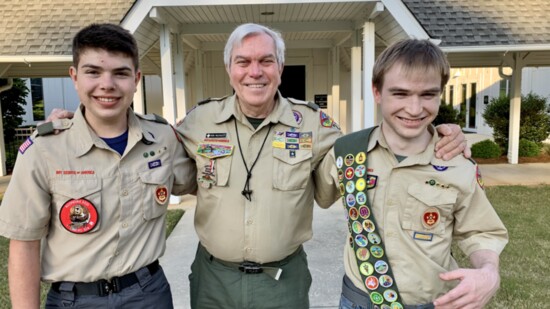 All about four of our community's best

Founded in 1910, The Boy Scouts of America is the largest Scouting organization in the world. Here, in Fayette County, 1,050 of our youth are involved in the organization thanks to volunteers like Scoutmaster Ron McCauley. His goal is to teach Scouts life lessons like citizenship, leadership, life skills, survival skills and service to the community.

McCauley has spent 40 years in Scouting, beginning as a Cub Scout at just 8 years old. He worked his way up to become an Eagle Scout by 16 and has worked as a volunteer throughout his adult life, including as a Scoutmaster for the past 11 years. He wants to offer others the same experiences he's enjoyed. “These kids develop as leaders and gain maturity as they move up in the Scout ranks,” McCauley explained. “I love helping young Scouts develop into men and teaching life skills along the way.”

Ethan Franklin is a student at McIntosh High and a Patrol Leader in Troop 210. He has overcome many obstacles related to his disability. He has learned new skills and made loyal friends. He recently completed all requirements to become an Eagle Scout. Jacob Barry, also a student at McIntosh High, is Troop 210’s Senior Patrol Leader. He has a heart for service as he has made numerous mission trips to Mexico to build homes for those in need.

Philanthropy is a building block for all Scouts, and Troop 210 has conducted nearly 40 service projects. The RealLife Center in Tyrone is one outreach program that the Scouts work closely with. In the past 6 months, Fayette County troops have directly donated to the center with toys and 2,200 pounds of food.

On July 1, Dr. Thomas J. (Tim) Hynes, Jr., president of Clayton State University, won’t wake to an alarm. After completing his 12th year with Clayton State, the last leg of a career that includes 25 years with the University of Georgia System, he’ll begin his retirement.  “The timing is good,” he said, though admitting he’ll miss interacting with students. “We’ve had a great opportunity to do some great things in South Metro Atlanta.”

One of the pillars of Dr. Hynes’ vision for Clayton State has been university-based community engagement—partnering with local school systems and offering the university’s intellectual capital to public, private and nonprofit sectors. Examples include collaboration between the Fayette County Chamber of Commerce and College of Business faculty to create workforce development strategies and the creation of the university’s first bachelor’s program in film and media studies as a result of partnerships with film production in Fayette County. “The university with the community can help work to a brighter future and that future of course will inevitably be associated with learning,” he said.

Dr. Hynes believes Clayton State will continue to have a growing role in learning and talent development in Fayette County especially as a part of the planned collaborative center at the old Booth Middle School. The center will offer a variety of programs and extensive opportunities notably in the health sciences. “I think the future of that collaboration is incredibly bright,” he said.

Saying that others will have to figure out his legacy, Dr. Hynes, a first-generation college graduate, does hope his notions of collaboration and the importance of intellectual capital will remain with those who follow him.

Dr. Marcus Broadhead’s decision to become an educator 22 years ago was based on what he believed he was not receiving as a student. This is what shifted his perspective and his ‘why’. He began to feel more necessary, and quickly realized how necessary he needed to be in the scope of education. “I take ownership of my leadership role here as an educator of old — of all the black male educators who came before me in that we cared about the community. What we did in this seat was about what we needed to do for the community. We did all the things we needed to in order to make school a real opportunity.”

Transformation has taken place at BMMS, where Dr. Broadhead has been the Principal for the past six years. Expect Excellence and This is the Beginning of Anything you Want - messages that adorn the walls of the school where the students have tremendous respect for the principal they see as ‘cool’, and where the teachers and faculty feel supported by their fearless leader.

Students are not shy about engaging with Dr. Broadhead. “I am aware that everything I say to them matters so much that it feels unprecedented. That is a very powerful feeling because it’s just love. It’s just love and there’s no other way to describe it. That’s what is so pure about what drives me in what I do. There’s a level of morality and mission I think every principal should have.”

Dr. Broadhead maintains a sense of respect for students while helping them to understand he is there to support them. The sky is the limit for the students at Bennett’s Mill Middle School.

Jeff Davis'  fascination with snakes began when he was growing up in Peachtree City. “I had a natural interest in snakes,” he recalls. Over the last 30 years, he has rescued and relocated hundreds of venomous and nonvenomous snakes in Fayette and Coweta Counties.

When Jeff saw on Facebook that people were asking how to identify and remove snakes from their properties, the Peachtree City resident unhesitatingly reached out to help. Soon, Jeff’s popularity and reputation grew, and he became known as the "Snake Wrangler.” Being a licensed Nuisance Wildlife Control Operator and Commercial Trapper has garnered Jeff work on The Walking Dead and for Warner Brothers.

On a reptile call, Jeff always arrives with endoscopic and motion-sensing cameras. Though it may take just minutes to catch a snake, it may take hours to find it. Once captured, Jeff weighs, measures and photographs the animal. A report is then filed with the State of Georgia.

Jeff's mission is to educate people about the benefits of snakes and to promote snake conservation. He warns, “If you do spot a snake on your property, back away from it! Do not attempt to kill it! It’s illegal in Georgia to kill nonvenomous snakes.” These reptiles feed on rodents, and on ticks that cause Lyme’s Disease. Snake venom extract has many medicinal purposes; the treatment of strokes, bleeding disorders and high blood pressure. Jeff hopes to dispel many of the misconceptions about snakes.

Anyone can text Jeff Davis snake photos at any time for rapid identification or relocation of venomous and nonvenomous snakes. (770) 402-0325. Jeff responds 24 hours a day.