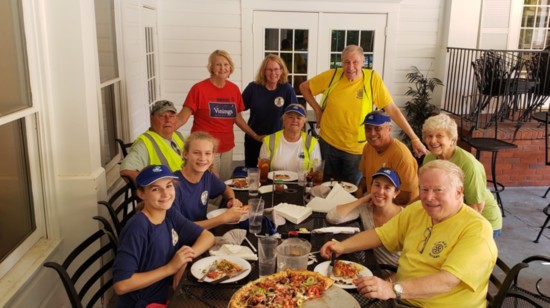 The Vinings Village Civic Club has a mission and a duty to the Vinings community. Its members strive to know their community and their neighbors, keep Vinings beautiful, keep the community informed and support their local public service organizations.

This historic club has its roots from the early 1900s; just take a look at the club’s newly preserved bylaws from 1919 at the Vinings Historical Preservation Society on the corner of Paces Ferry and Paces Mill. Since that time, the club has been a place for neighbors to meet, keep up with happenings and have a say in the changes being made in the community in order to maintain the “quaintness” of Vinings.

The club now has more than 250 members which include not only our residents but many of local Vinings businesses. This organization serves not only as a focal point for our community spirit, but also as an endeavor to encourage civic improvements that will continually maintain the character and beauty of Vinings.

The VCCA conducts quarterly cleanup outings to keep Vinings beautiful as well as political forums so that residents can hear from candidates firsthand. One of the improvements the VCCA has been heavily involved in is the proposed Vinings Bypass. This effort to divert pass-through traffic from Vinings is an ongoing project the VCCA has spent hundreds of hours on. Even though most of our members are not pass-through drivers, diminishing the pass-through traffic would benefit us all. Word of mouth could help reach the broader audience.

From those working with the county, word is the Paces Mill/Paces Ferry intersection work will take nine months to complete. Bids are to be let by November of this year. It is hoped the disruption will prompt motorists to seek alternate routes. The committee plans a series of signs along Cobb Parkway/Northside Drive to encourage people to take this alternate route: the Vinings Bypass. The flow bypass will continue up Cobb Parkway., left on Cumberland Boulevard, to Wilkerson Parkway, to Spring Hill Parkway, to Paces Ferry where the Panera Bread restaurant is located. A map of the proposed Vinings Bypass is located on the website, ViningsVillageCivicClub.com.

“As a part of the Vinings Bypass and infrastructure project, the island at the intersection of Paces Mill and Paces Ferry will be no longer. With that, our beloved fountain that sits atop the island will be moved to property belonging to the Vinings Historic Preservation Society—likely the Pace House—when construction begins in early 2019.”

The Vinings Village Civic Club meets on the second Monday of the month at 6:30 p.m. at Cochise Club. Support your community and become a member of the VVCC. Email info.viningsvillagecivicclub@gmail.com.