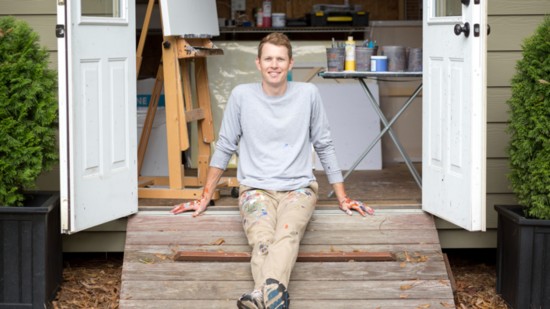 Born and raised in Kansas City with a fascination for art, Patrick Lewis began experimenting with charcoal and acrylics on paper and canvas at an early age, throughout middle and high school. He excelled in formal classes, painting portraits and landscapes, only to “regrettably hit the pause button on art,” Lewis recalls, remembering the day he packed up for Vanderbilt and put away his passion for creating art to focus on an economics degree and the world of business.

Lewis would graduate, move south to Atlanta, marry his college sweetheart Katie, earn an MBA, enjoy a highly successful corporate finance career, and welcome his first of two daughters into the world before reconnecting with his artful soul.

Rediscovering the Art World is His Oyster

Even without a paintbrush in his hands for years, Patrick Lewis kept his love of art alive vicariously through other artists he enjoyed collecting. The seascapes and oysters by Bellamy Murphy of Savannah, Georgia, and the loose style of Robert Joyner of Richmond, Virginia, had an important influence on his return to the easel four years ago.

“We purchased one of Murphy’s signature oyster paintings while on vacation in Savannah, and I kept looking at it over and over again, thinking about painting again myself,” Lewis recalls of the very moment he became an artist again. “That painting helped to reignite the passion I kept pushing back in order to meet the demands of life.”

The unstructured strokes in Joyner’s work also resonated deep within Lewis, whose similar approach has earned him a spot among Atlanta’s most popular emerging artists. “I just love painting a familiar scene or subject with expressive, loose brushstrokes and bold colors, and in the end you still know what you’re looking at,” Lewis says.

“There’s nothing more invigorating than starting out with a blank canvas and ending up with a painting loaded with personality,” Lewis says, as he put big sweeping strokes of color on his 6' x 8' iconic portrait of Albert Einstein. “I was definitely no Einstein when I put down these paintbrushes as a teenager,” he jokes, adding a few finishing touches in his Buckhead home studio to the mammoth painting destined for the Buckhead headquarters offices of Kids II, the global manufacturer of Baby Einstein brand toys.

“Patrick’s work features incredibly bold brushstrokes and colors that really make a commanding statement,” says Melanie Millner, founding principal for The Design Atelier, an award-winning Buckhead-based interior design firm that managed the Einstein installation at Kids II. “This giant Albert Einstein portrait, complete with an inspirational quote the executive team holds dear--"I have no special talent, I am only passionately curious"--is absolutely what the company was hoping for when they commissioned the painting.” Millner first saw Patrick Lewis’ work at the 2017 Trinity School Spotlight on Art.

Lewis’ paintings have grown in scale along with his popularity among collectors and designers throughout Atlanta, the Southeast, and across the country. His big, colorful American Flag and popular Chick-fil-A cup paintings and his large, expressive portraits are among the 36-year-old artist’s most requested pieces. They are sure to be among the most sought after at the 2019 Trinity School Spotlight on Art (January 28-February 2), always one of the most highly anticipated annual art events in the Southeast.

Lewis’ fast-growing clientele and collector base, who’ve been introduced to the artist’s work through his website at PatrickLewisArt.com, social media, Atlanta’s Westside Market Gallery, and the yearly Trinity School art show, are snapping up his work that is constantly influenced by everyday life, iconic figures, and cultural brands.