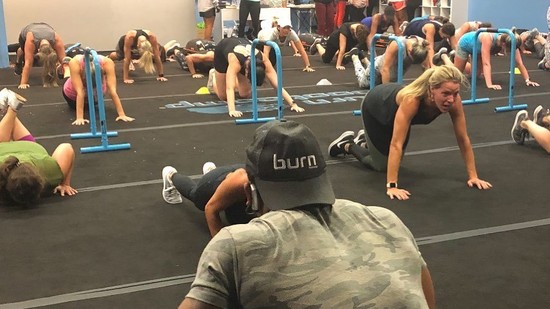 If It Doesn't Challenge You, It Won't Change You

How One Gym Is Changing The Way We Workout

Fayette County residents, Ezzie and Jodie Raulls recognized this quandary and set out to shift our thinking. Ezzie has been an athlete his entire life. He was a student athlete at the University of Alabama, earning a scholarship. His dreams were fulfilled and life was headed in the right direction. However, due to an injury, he was put on probation and his progress halted.

“Although I was in a great situation with an opportunity to really fulfill my dreams I didn’t process it that way,” Ezzie recalls. “Because I was in a bad head space, I was in college and on the streets.” This conundrum led to his arrest for armed robbery / burglary of an occupied dwelling.

Ezzie spent 6yrs and 10mos in the Florida Department of Corrections, “My first day in DOC was the most humiliating moment of my life. I was eight hours away from home and nobody could save me. That was my very first time being strip searched and it was humiliating. Hearing that I was now the property of the Florida DOC was awful. I felt less than a human being and of course they treated me as such.”

After 6yrs, he was placed in a work release at Subway. He knew this wasn’t his calling, leading him to apply for a job at Gold’s Gym in Tallahassee. Here, he was encouraged and inspired, remembering his calling for a life of success, health and fitness. The icing on the cake at Gold’s Gym? He met the love of his life, Jodie.

The two became a powerhouse of positivity and strength. Their journey brought them to Atlanta where they discovered Burn Boot Camp, a boutique fitness boot camp. Instantly, they knew this was their calling.

“Burn is not just a gym, it’s a community of people who are working towards a better quality of life. Trainers are invested in your life and fitness goals,” Jodie explains.

Burn Boot Camp in PTC opened its doors in August 2017, and from day one, it’s made a difference in how people perceive exercise. Shortly after opening the PTC location, they opened a Newnan location and will be opening a third location in Fayetteville, come 2020.

Burn member, Natasha Farr, knows first hand the impact of Ezzie and Jodie. “Burn is different because they make the workout for you, tell you what to do to get better and push you.” When Natasha doubted herself during a workout, Ezzie was beside her, encouraging her and pushing that fear away. Throughout her journey, she has lost over 40lbs and has gained a sense of self confidence that wasn’t there before.

Gone are the days of staring at the clock, wishing the class would end. At Burn, each class is 45 minutes and you don’t stop moving. At any given class you may be shoulder to shoulder with people just like you, people who put their to do list on hold to squeeze in a killer workout. You will high five each other, pat each other on the back and secretly roll your eyes behind Ezzie’s back as he screams, “HARDER, FASTER, BETTER!!”

You will never do the same workout twice. The music is bumpin’ and the energy level is at an all time high. It’s a mix of challenging exercises that leave your muscles saying, “Oh hey, yeah, remember me?”

Ezzie and Jodie couldn’t be more proud of their past, their present and their future. “Burn boot camp is truly unlike any other gym we have attended or been a part of. These people are our family and we love being a part of the change in this community. We cannot wait for our next location in Fayetteville to open.”

As Ezzie and Jodie say, “if it doesn't challenge you, it won't change you!”