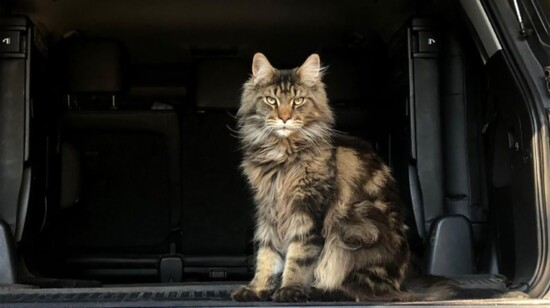 When Karen Robertson and her fiancé Vann Friesen were looking to add a Maine Coon cat to the family, they knew they needed one who was not easily cowed. With Vann’s two children, 14-year-old Teague and 16-year-old Tolan, plus Beckett, a 150-pound Newfoundland and Billy the black Lab, their household was a busy one. “We asked the breeder to please find us a bold cat,” says Karen. “She delivered with Sid Mittens, that’s for sure.”

He was 10 weeks old when they brought him home in November 2019, and they originally named him Sid Vicious, after the punk band musician. They later changed his name due to his large paws, which they called mittens. Today, the 18-pound Maine Coon loves hanging out with his big dog brothers and the rest of the family. “He’s extremely tolerant and sweet,” she says. “Anyone can pick him up and snuggle with him. Vann’s daughter Teague, though, is his favorite person.” Sid has his own Instagram account with followers from around the world. “He actually has many Russian followers; apparently Maine Coons are huge in Russia. He’s constantly getting private messages in Russian.” @sid_mittens_mainecoon