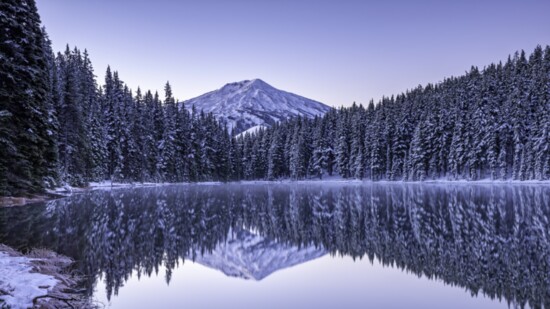 Photographer’s Notebook: Walk in Step with Steve Giardini to Compose a Winter Scene at Todd Lake

I snowshoed five minutes northwest from Dutchman Flat and stopped. I turned off my headlamp and looked up. As I did I exhaled creating a large cloud of warm mist that filled the icy-cold air. It was early, astronomical twilight still lingered. Stars were still prominent in the sky. The moon was traversing across the Southwest headed for a moonset. I could see the outlines of South Sister and Broken Top Mountains. Neither was my target this morning. The previous day the weather forecast called for nighttime snow at higher elevations. I imagined snow hanging from trees and a white blanket covering the ground. I immediately had a winter landscape photo idea.

It is a five-mile round-trip snowshoe trek from Dutchman Flat Snow Park to Todd Lake. Each time I make this winter trip through the morning darkness along the forested path I am grinning from ear to ear. The sense of adventure and anticipation overrides any burden of physical effort required. Unlike the return trip, my 30-pound backpack full of camera gear is weightless on the outbound journey. Often my photo objective is to capture dramatic landscapes with big colorful cloudy skies. I knew this wouldn’t be the case on this adventure. But my photo pre-plan didn’t require a colorful sky. I planned a simple winter scene composition. I would use the “V” created by the snow-covered trees along the lake shoreline as a pointer. A visual cue or compass that would lead the viewer’s eye directly to Mount Bachelor in the distance.

I hoped the morning sun would strike the East side of the mountain at an oblique angle revealing its groomed and un-groomed contours. And, maybe I’d get lucky and be offered a little alpenglow to enhance the image. I reached the lake with plenty of time to scout a composition from the furthermost shoreline. I debated what lens to use. A long lens would make the mountain larger in the final image. But a wider angle would allow me to include more shoreline, more foreground water, more mountain reflection, and a bit of the frosted red grass along the shore closest to me.

As usual, time began to speed up the closer sunrise approached. I walked the shoreline, stopping frequently to look through the camera viewfinder. I settled on a composition. Time to mount the camera to the tripod and begin the test exposure process. I had my settings dialed in. It was about then that it dawned on me I hadn’t seen another person the entire trip. I had this place all to myself. It was silent.

The blue hour arrived—the period that coincides with civil twilight and proceeds the official sunrise time. It was happening. It was the perfect hue for the photo I imagined. The blue tone and hint of fog on the water surface added just the right amount of atmosphere. Click. It was peaceful. Click. It was magical. Click. It was stunning. Click. It was over.

Steve J. Giardini is a Bend-based professional outdoor photographer. He is an artist, educator, speaker and adventure photo guide. Steve creates fine art photographic images using a traditional composition style. His goal is to capture the natural world in dramatic natural light. Steve’s work has been published in the international online publication Landscape Photography Magazine, Bend Lifestyle Magazine, and is displayed in businesses and client homes throughout Central Oregon and across the globe. GiardiniPhotography.com