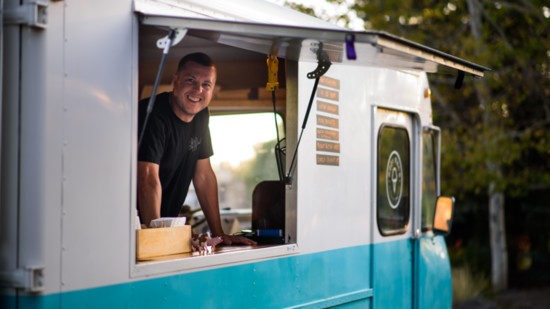 There is no denying that a strong sweet tooth can create some of life’s greatest concoctions, even on a shoestring budget. You could say that’s how Bend-based ice cream truck Addy Mac’s started. “My first memories of making ice cream were using my Mom’s antique hand-crank ice cream maker on the porch in Estacada, Oregon,” said Justin Scott, co-owner of Addy Mac’s ice cream trucks. “Ice, water, and sugar were flying everywhere and dripping on the porch. We’d carry over crates of blackberries plucked straight from the neighborhood bushes to add flavor.” In 2014, Justin took his ice cream-making skills to the next level and enrolled in one of the country’s oldest and best-known short courses at Penn State University. He learned about manufacturing, recipes including magical butterfat, and the science behind ice cream from “cow to cone” as dubbed by Penn State. More than 125 years ago, the School of Agriculture began offering the dairy manufacturing classes each January when farmers and workers could spare the time.

Addy Mac’s was named after owners Justin and Jessica Scott’s two daughters, Addison (Addy), age 11, and Mackenzie (Mac), age nine. After the Scott’s moved to Bend from Portland for work, they got their side gig dreams going and scoured the internet for a vehicle that would harken back to the days of old-fashioned ice cream served right from the window of a truck. The United States’ first ice cream truck came out in Ohio in 1920, largely due to the advances in electric cooling and the beginning of Prohibition when a sweet treat could replace banned sprits. The Scott’s eventually found a 1963 Ford Boyertown dairy truck for $500 in Klamath Falls that had been used for storage. It was non-working and they had it towed to Bend for $300. After renovation, a good tune up, a new battery, sanding the exterior and painting, the Ford was given a second shot at life. The truck had its heyday in Burns, Oregon in the mid-century as a bread, dairy, and food delivery vehicle. Nowadays, Addy Mac’s has two Boyertown trucks, both painted a vibrant two-tone turquoise and spinnaker white with old-school branding and design. The Scott’s first began making the ice cream at home between their day jobs—Jessica is a former elementary school teacher and now working in the dean of students, and Scott is an area director for the nonprofit Young Life. They started simple just as Justin’s mom taught him. “I am a treasure seeker or ‘junker’ as some might say,” says Scott’s mother, Lisa Scott Waldron, who found their original ice cream maker at a yard sale. “I’m from a family of nine and I grew up on a working farm. My Mom, Ruby, taught me how to make ice cream, just how Justin learned, except my brothers milked our cows,” she says.

Addy Mac’s keeps their menu offerings simple with core flavors, including: Salted vanilla, milk chocolate, roasted strawberry and buttermilk, peanut butter and Oreo, two coffee flavors sourced from both Backporch Coffee Roaster’s Ethiopian beans and Megaphone Coffee’s Rally Cap espresso. Plus, a fan favorite and dairy-free option, canela coconut. The ice cream ingredients are sourced locally from the Bend farmer’s market, dairy products from Eberhard’s Dairy in Redmond, and Windy Acres Dairy Farm in Prineville, plus a long list of other businesses. Now seven years later, Addy Mac’s runs a small commercial operation at Eagle Mountain Kitchen, where the ice cream is made, and has up to twelve seasonal employees working various roles each season running from about June until October. Locations vary, and are updated @addymacs,  AddyMacs.com