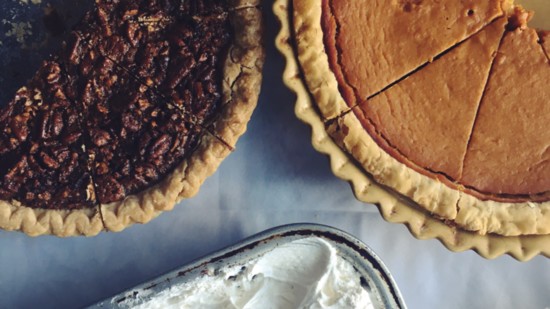 Two Thanksgiving Pies Face-Off and Combine for a Winner

Pumpkin pie was not served at the first Thanksgiving because early settlers had no ovens for baking.

The first “modern” pumpkin pie recipe was published in 1796 by Amelia Simmons in American Cookery, the first known cookbook of the Americas.

According to the Illinois Department of Agriculture, 95 percent of the U.S. crop intended for processing is grown in Illinois.

In 1929, Libby’s canned pumpkin was introduced to the United States. Libby’s is not actually pumpkin, but instead is a Dickinson squash that also has orange flesh.

The name pecan is derived from the French word pacane, which is taken from the Algonquian word for “nut.”

Pecan trees are native to North America and over 80 percent of the world’s pecan crop comes from the United States. The pecan capital of the world is Albany, Georgia, which boasts more than 600,000 pecan trees.

The earliest printed pecan recipes began popping up in Texas cookbooks in the 1870s and 1880s.

Pecan pie surged in popularity during the mid-1920s when the manufacturer of Karo syrup began printing a recipe for pecan pie on cans of the product, as James McWilliams noted in The Pecan: A History of America's Native Nut (which explains the use of Karo syrup in traditional recipes).

PUMPKIN PIE SPICE: Combine 4 tsp. cinnamon, 1 tsp. ginger, ½ tsp. allspice, ½ tsp. nutmeg, ½ tsp. cloves. Use 1 ½ tsp. of the mixture for this recipe and store the rest in a sealed container.

Bake 40 minutes or until knife inserted in the center comes out clean. Cool completely on cooling rack. Store covered in refrigerator.