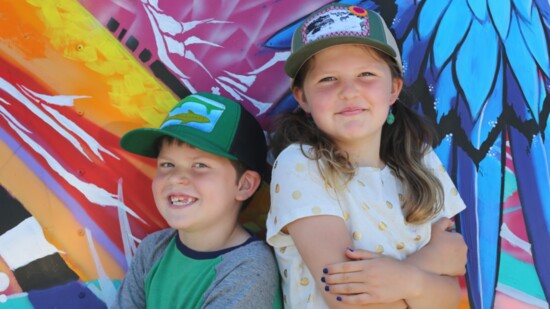 Expecting chicken nuggets and buttered noodles on a kid’s menu in 2021? In Bend, Oregon, think again. The foodscape is as full of range and diversity as the landscape. Respecting the evolving palate of our youngest diners means that simple proteins and pasta do have a place on a restaurant’s children’s menu. However, the experience for young eaters can now include international flavors, farm-to-table ingredients in an implicit agreement with parents that the introduction of new foods will help their kids expand their taste buds and palate.

The introduction to a variety of foods and healthy options starts first at home and school. Nora and Zeke Greene, of Bend, both have had experiences in their classrooms that translate to the real culinary world. Nora, age nine, will be a third-grader at Highland Magnet School at Kenwood where they teach the Scottish Storyline Method. During a Storyline, students create a setting, become characters, and solve problems as details of the story unfold. A memorable unit for Nora was called Top Chef, where students became cooks in Mexico to learn math as they used measurements of ingredients, to learn kitchen skills, and to sample ingredients like chilis and spices. “We learned a lot about Mexican food,” says Nora. “We practiced a lot of cutting and got to make our own salsa.”

Nora’s brother Zeke, age 6, was a kindergartner at Highland School and his Storyline allowed him to become “Frank Farmer.” As a farmer, he and his kindergarten classmates were able to learn where food comes from, according to Zeke. He says they learned how to grow vegetables from seeds, and they even watched for chicks to hatch from eggs the classroom kept in an incubator.  He looks forward to cooking with bush beans that he started as seeds in his classroom and that will be replanted in his family’s garden.

“Storyline gives students the opportunity to step into new and real-life situations,” says Nora and Zeke’s mother, Marieka Greene, a second-and third-grade teacher at Highland Magnet School. “Their experiences empower students and help them to develop autonomy and self-determination that serves them long after they leave our school,” she says.

For Nora and Zeke, the stories told in the classroom seamlessly translate to a home life where the farm-to-table concept may be followed through, such as how they will plan to harvest Zeke’s bush beans from the garden later this summer and incorporate them into a late-summer meal. “The most fun way to get kids interested in veggies is to grow their own,” says Marieka. When kids feel more connected and a part of things, they almost always find more value in it,” she explains. The Greene family also understands the challenge of finding common ground for kids during mealtimes. Nora and Zeke can have their own ideas when it comes to food. Nora doesn’t like to eat meat, her favorite foods are juicy fruits and “smoothies,” she says. Zeke’s favorite foods include meat. Going out is a treat for the family, and different tastes mean different choices. Zeke’s pick for a favorite restaurant in Bend is El Sancho where he likes their beef taco and proclaims he can eat “ten.” Nora suggests the versatility and interactive experience of Flatbread Neapolitan Pizzeria where kids are given dough and toppings to create their own pizza.

For Ted Swigart, partner/operator of WASHINGTON Kitchen & Cocktails and DRAKE restaurants, being a father had a part in how he and his team developed kids’ offerings for both locations. As parents, they understood that children are learning how to experience food but should be respected and provided with quality options, so there was no, “dumbing down,” the menu he says. Like adults, they also have very different tastes and independent ideas at mealtime. To that end, the WASHINGTON menu provides options for proteins, vegetables and starch where the parents are able to "assist" in crafting the meal. It was important though, says Ted, that they make it appear the kids are in charge.

Guiding and helping children develop a taste for good food is a community effort. With the support of teachers, parents, and restauranteurs, kids can develop a foundation from which to make food-healthy choices for themselves going forward. Fortunately, there are plenty of options in Central Oregon to help expand culinary tastes, while also allowing parents to enjoy their own dining experience. Here are three of our top picks for the youngest foodies in town: