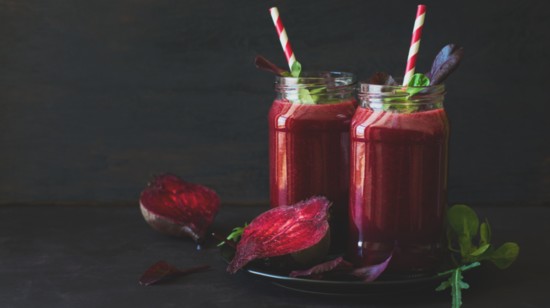 Aaron Talbot has a self-described “blueberry problem.” His quest for finding the tastiest, organically grown blueberries in Oregon for his daily smoothies led him to freeze up to 100 pounds of blueberries every year. Now the owner of Humble Beet, a new market/deli/café on Bend’s west side, Talbot offers a selection of 100%t organic, non-GMO smoothie concoctions.

His Up Beet smoothie packs a nutritious punch with Talbot’s favorite blueberries, as well as beetroot powder, which gives this drink its rich color. Blueberries are, calorie-for-calorie, one of the most nutritious fruits available and are loaded with anthocyanins. The beetroot powder also contains a high concentration of this antioxidant, which research suggests may play an important role in helping reduce the risks of cardiovascular disease, cognitive decline, and cancer. Two teaspoons of beetroot powder is the equivalent of two whole beets—which in combination with banana, contain natural sweetness. With a bit of turmeric, the Up Beet also has anti-inflammatory properties, a bonus to this delicious and nutritious anytime drink. HumbleBeet.com