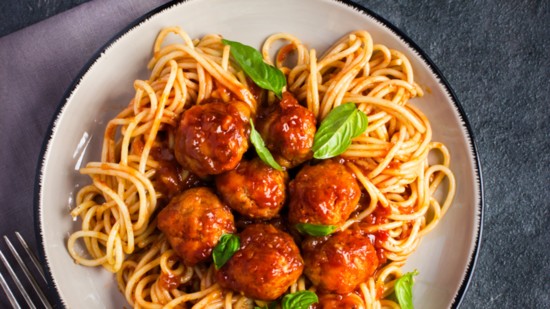 Considered one of the greatest gangster films in world cinema, The Godfather was the highest-grossing film in 1972. It launched the careers of director Francis Ford Coppola, Al Pacino and revitalized the career of Marlon Brando who played the iconic Vito Corleone. New York City is the backdrop for this 1940s and '50s mafia film. This Academy Award winner runs three hours, perfect for a multi-course traditional Italian-American dinner. Take your time with this one. Start the film and your sauces at the same time, eat slow and enjoy!

2 onions, cut in half

Add milk to breadcrumbs and set aside. Combine meat, cheese, parsley, salt and pepper in a large bowl. Whisk eggs and garlic separately, then add to meat. Squeeze milk from breadcrumbs and fold into mixture until just combined. Form into meatballs and chill. Meanwhile, combine tomatoes, butter, onion, and spices in a pot. Simmer, uncovered for 45 minutes. Discard onions, remove bay leaves and season to taste with more salt and pepper. Use an immersion blender to lightly blend the sauce. Form meatballs and add to the sauce and simmer an additional 20 minutes (or until meatballs are cooked through). Cook spaghetti according to package instructions, then drain. Add sauce and meatballs and top with fresh basil.

Based on the book, Fried Green Tomatoes at the Whistle Stop Café by Fannie Flagg, this classic

film has an all-star cast and a story that both men and women will enjoy. Centering around the

Whistle Stop Café in the heart of Georgia, this film serves up comedy, drama, murder and

traditional southern food eaten by customers who are all part of the tragedies that unfold. Our

from the Umpqua Valley.

2 tbs. cinnamon and sugar mixture to sprinkle on top

Combine peaches, 1/4 cup white sugar, 1/4 cup brown sugar, cinnamon, lemon juice, and cornstarch. Toss to coat evenly and pour into a 2-quart baking dish. Bake for 10 minutes. In a large bowl, combine flour, 1/2 cup white sugar, baking powder, and salt. Blend into a course mixture. Stir in water until just combined. Remove peaches from oven, and spoon topping across the mixture. Sprinkle with white sugar and cinnamon and bake until topping is golden brown, about 30 minutes. Enjoy with the end of the movie!