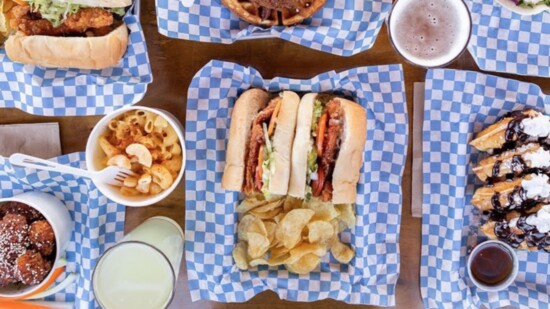 Attack of the Food Carts

Parked on corners and tucked behind breweries, Central Oregon’s food carts are always ready to satisfy a craving. With roots in California taco trucks and New York hot dog carts, these restaurants on wheels were the logical next step to the influx of coffee kiosks now located at many major intersections. Beginning nearly a decade ago and steadily rising in numbers, food cart pods in the High Desert are more than just a place to eat.

Equal parts restaurant, taproom, and picnic area, food cart pods started in 2013 with The Lot in Northwest Bend and have spread to more than a dozen locations throughout Central Oregon. The open-air pods are family—and dog—friendly and because they offer wide selections in food options, there’s usually something for even the pickiest of eaters.

Anchored by the Bevel Craft Brewing taproom, The Patio is a food oasis in Southeast Bend. A mural depicting a funky disc-golf player overlooks tables and art installations crafted at neighboring DIYcave and artist collectives. The hop garden to the south frames in food cart options. Bring a disc to toss at their private disc golf basket. Try Po’ Boy sandwiches from Southern Accent. 9thStreetVillage.com

Adjacent to The Box Factory in Bend’s upper Old Mill area, The Podski hosts an eclectic mix of food carts, an indoor beer garden, and even a mobile hair salon. Though they offer a friendly atmosphere, West Coast craft brews and other drinks, The Podski shines with international food selections from the Middle East to Asia. Try the Fried Chicken Sandwich from Tin Pig. The Podski.com

The Midtown Yacht Club brought a much-needed hangout area and food options to Midtown Bend in 2020. Not only do they offer six food carts and twenty rotating taps of beer, ciders and other libations, but plenty of tables allow friends and neighbors to gather inside or out. Catch NFL football games and occasional live music there as well. Try the chili dog from Alley Dogz. MidtownYachtClub.com

Filling the food gap in downtown Tumalo, The Bite’s backyard party atmosphere welcomes families to hang out, enjoy food and a beer, and listen to music. Though it’s not uncommon to see singer-songwriters perform for the crowd seated around picnic tables and reclaimed wood spools, the Living Room Sessions sees bands of all genres providing the soundtrack to the night. Try the carnitas tacos from Rico’s Tacos. TheBiteTumalo.com

Located in Bend’s east side medical district, On Tap Bend offers more than 30 rotating taps of beer, cider, wine, and kombucha, plus a line of food carts. Wood picnic tables and black metal tables and chairs provide ample seating as the stacks of wood for fire pits prove this is a year-round food cart location. Catch the weekend live music from their lighted stage. Try the Sha-momo from Himalayan Bites. OnTapBend.com