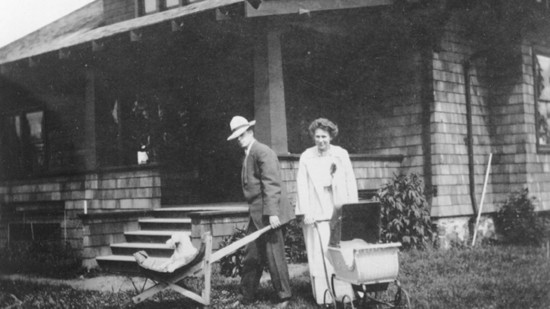 A lesson on Bend’s early history is represented by some of the 59 surviving historic structures or monuments in the Deschutes Historical Museum’s “Heritage Walk” program. Local historian James Crowell writes about the history of the Putnam House for Bend Lifestyle in the pages that follow. Crowell, a resident of Bend for 79 years, worked as a reporter for the Oregonian, is the author of four plays (three produced) that have been staged in San Francisco, Denver, Eugene and Bend. He is the author of Frontier Publisher, a biography of George Palmer Putnam. —Editor's note

About 10 p.m. on a late February night in 1912, newlyweds George Palmer (G.P.) Putnam and Dorothy Binney Putnam arrived at the new Bend railroad depot after a three-month honeymoon. Their honeymoon had taken them 6,000 miles by ship from New York City to six Central American countries and up to San Francisco, then via train to Portland and then into the little village of Bend, population 536 in the 1910 census. The couple was then escorted by neighbors, Morris and Mabel Lara, to their new home at 606 Congress, a home neither newlywed had ever seen before that night. The Lara’s own house at 640 Congress is now one of the most picturesque bed-and-breakfast establishments in Bend.

G.P. and Dorothy named their four-bedroom, shingled bungalow, “Pinelyn.” It is still on the original site, its exterior virtually unchanged in more than 100 years. It was the third most expensive building constructed in Bend in 1911-1912, boasting 2,800 square feet of living area and costing more than $4,000. A tennis court was added to the site in 1913, solidifying “Pinelyn” as the social center of Bend in the years to come.

G.P. had arrived in Bend in the spring of 1909 and soon purchased a one-half interest in the Bend Bulletin. He was the sole owner a year later.  He had also been appointed mayor of Bend when he was only 22 and was later elected to a full term.  He was the major force behind the creation of Deschutes County with Bend as the county seat. Educated at Harvard and the University of California at Berkeley, he was an heir to the New York City book publishing company, G.P. Putnam’s Publishers, Inc.

Dorothy graduated from Wellesley College and was the heiress to the Binney and Smith Crayola Crayon fortune. She and G.P. had met on a climbing expedition of Mt. Whitney in 1908. G.P. was working for the Sierra Club and was the guide for the Whitney climb. The Putnam house was soon the scene of Dorothy’s elaborate weekend parties for which the guests received printed invitations and were required to wear costumes and sing the lyrics for the musical skits she wrote. She provided the musical accompaniment from her Steinway Grand piano that had been shipped by rail from her home in Greenwich, Connecticut. The Putnam living room was also used by various early Bend religious denominations for Sunday church services and for meetings of the Bend Emblem Club.

The Putnams’ first child was born in the house with Bend’s only doctor, Dr. U.C. Coe, delivering the 9-pound, 8-ounce David Binney Putnam, in 1913. At Dr. Coe’s direction, David was taken downstairs by his father and “set to toast before the open fire” in the large fireplace. David was later named “Bend’s Happiest Baby” at the city’s annual Fourth of July Celebration.

After serving in World War I, G.P. took over the leadership of G.P. Putnam’s Sons, Inc. Before leaving Bend for good, however, he and Dorothy had purchased, platted, and sold the riverfront home sites on Drake Road, the 11-acre site on the west bank of the Deschutes, between what is now the Newport Avenue Bridge and the Drake Park footbridge. He named the access road off Newport, “Dohema Road,” using the first two letters of the three Binney sisters, Dorothy, Helen and Mary.

In 1928, G.P. discovered Amelia Earhart, working as a social worker in Boston. He planned and ultimately managed her historic first flight over the Atlantic Ocean. He then directed all aspects of her aviation career, including the writing and publication of her book about the flight and later her autobiography and biography. G.P. and Dorothy divorced in 1929 and he married Amelia in 1932. They were still married when she disappeared in July 1937 on her attempt to be the first person to fly around the world.  DeschutesHistory.org

1909
G.P. purchases one-half ownership of the Bend Bulletin and is sole owner one year later.

1932
G.P. marries Earhart. They were married when she disappeared in July 1937 in her attempt to fly solo around the world.