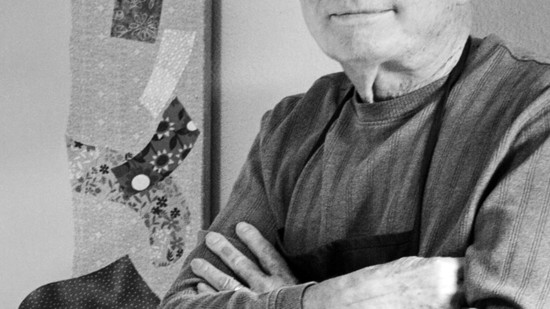 The Art of Richard Cork

Richard Cork, 85, can muse for hours over coffee and converse on all matters, from politics to marriage, war, music, language and art. Richard is a fine artist with a successful career as a graphic designer and training from San Diego State University. He has spent his life working across the creative spectrum—photography, oil painting, illuminated sculpture, and printmaking join the list of mediums he has explored. He has also drawn personal comics, worked in publishing, and taught design communications at a university.

In his Bend home, processed photographs fill gallery walls, where cities of architecture, curves of steel, and urban artifacts such as warn paint, brickwork and old typography are detailed, endearing and some haunting. His other pieces exploring the use of metal and three-dimensional art fill corners and spaces of other bedrooms. In the lower level of his home, a studio is filled with his newest, personal reveries in collage, where his brightest and unexpected works are taking form.

Richard’s latest explorations use assorted fabrics applied to canvas with acrylics. The collages are unpredictable and some would say they break the rules of design.

“Why should the fabrics go together?” asks Richard. “This type of art is not completely a conscious thing, it’s more evolutionary. These collages are not a window on the world, but a window into a viewers’ mind,” he says.

The nature of Richard’s fabric collages may seem mad, but method is applied as he explores movement, color theory, negative space, and geometry. He was stirred by Sam Francis’ abstract expressionism early on, and whose creations were inspirational. Richard’s finished pieces are simply named with one word such as, “Tracery,” “Dulcet” or “Undulation.”Each piece elicits a different reaction.

Richard is a Renaissance man in his artistic life, having explored medium after medium. As a young man, he served in the Naval Submarine Reserves, and in the Army where he received training as a medic. Today, he makes his home in Bend with his wife, Marlene.

Visit Richard’s website to learn more about other upcoming shows, or find him at a local cafe in deep conversation, one of his favorite pastimes. RCorkArt.com