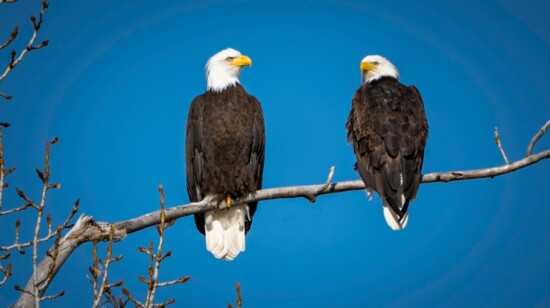 ‘Rurban' living in a quaint downtown, neighborhoods near farmland, and a thriving business community

In 1993 Congress designated the Snake River Birds of Prey National Conservation Area as home to the greatest concentration of nesting birds of prey in North America. A short drive north and a 130-years earlier, settler Truman C. Catlin used a preemption claim to acquire 160 acres along the Boise River during the last half of 1863. He named it Eagle Island to reflect the large number of bald eagles that made it their home. As a prominent feature in the city of Eagle, the Boise River Greenbelt remains home to the iconic bald eagle.

Eagle's fantastic location, high safety rankings, great quality of life, excellent schools, and relatively affordable housing has made it one of the most desirable places to live in Idaho.  With a population of just under 33,000, Eagle has a small-town feel with all the benefits of the city of Boise a short drive away.

Bald Eagles can be seen along the Boise River and nearby open water usually between November and March.  Several other birds of prey call Eagle home including Red-tailed Hawk, Swainson’s Hawk, Northern Harrier, American Kestrel, Cooper’s and Sharp-shinned Hawk as the most common found in the area.

Encompassing over 200 acres, this complex is one of the largest in the country. Features include freeride jump lines, a pump track, dirt jumps, dual slalom race course, mountain cross race course, and a BMX track, in addition to a skate park, basketball courts, and an inline hockey rink.

A weekly handmade market located in the heart of downtown in Heritage Park. Idaho vendors feature an array of arts and crafts along with local produce, herbs and flowers, woodwork, specialty food items, and freshly prepared food, along with local musicians.

This park is bordered on the north and the south by the Boise River and features a swimming beach, grassy picnic areas, five miles of trails for horseback riding, hiking or walking your dog. Check out the waterslide, 18-hole disc golf course and zip line tours.

One of the appealing things about Eagle is the buildings that played a role in the early 1900's were never torn down. Instead they were renovated in appreciation of the historic infrastructure. Today, these are just a few of the gems that adorn the streets of downtown Eagle.