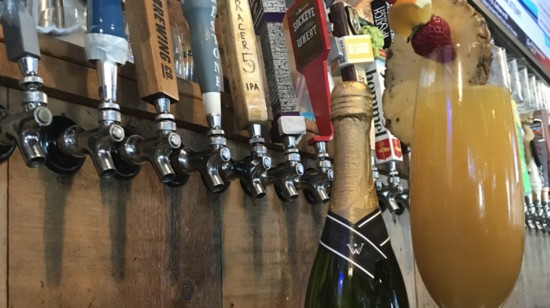 American Comfort at Its Best

While the Homestead Bar & Grill may have all the trappings of a sports bar—TVs, ample beer selection, Buffalo wings, strip mall location—don’t call it that.

“I say we’re an ‘American comfort’ bar,” manager Ben Hart says. “Once we’re called a sports bar, we cut our demographic in half. If we’re more than that, we can have that family atmosphere and the professionals during the day and the fun party people at night. We get all those demographics throughout the day.”

In addition to American comfort food and drinks, Homestead has been devoted to building a community.

“Getting people to actually meet each other,” Ben says. “I always taught the staff, ‘Hey, here’s Bill, here’s Greg, have Bill and Greg meet each other?’ And that really helps.”

It’s a formula that’s worked well, as both regulars and newcomers have helped the restaurant reach its third anniversary, which was celebrated on Feb. 2. Homestead’s menu is stuffed with fan favorites, and new items appear every six months based on ideas from the kitchen staff that debut as specials first.

“The creativity that we allow the staff to have, that takes a little more passion into our menu,” he says. “The cool thing … is that almost everything that we do is prepared in-house. All of our meats are smoked and cut in-house. Our kitchen manager and assistant kitchen managers take this big cut of meat and slice it into everything we need, from our finger steaks to our flat-iron steak to steak for tacos. Same with our chicken.”

If you’re unsure of what to try, Homestead Favorites selections are helpfully marked out on the menu. The signature half-pound burgers are also popular, as are the Mac Daddies (particularly the Tequila Chicken Mac and the Idaho Mac, which is like a loaded baked potato with a macaroni base).

If drinks are your thing, you’ll want to check out Homestead’s impressive line of 45 taps—40 for beer and five for wine.

“Our beer list is continuously rotating. We like to call it ‘rotation nation.’ After one keg blows, the next one’s on, and it’s a different flavor, a different profile,” he says.

With Benjamen’s background in spirits, the bar staff is also well-versed in cocktails.

“Anything from new age to classics,” he says.

Need a challenge? Take on the MEGAMOSA or Mega Mary. These massive mimosas and bloody marys are best shared with a friend (or two!).

Got a sweet tooth? Check out the dessert menu, which features such items as the Baker’s Choice and powdered sugar-covered beignets.

“The beignets I’ve been a stickler on because I know what they’re supposed to be like,” he says. (He travels to New Orleans every few years.)

More of brunch person? Head to Homestead on the weekend. From 9 a.m. to noon, nibble on a breakfast burrito, a Country Bowl or chicken and waffles.

Have kids under 12? From 5 p.m. to close on Sundays, kids eat free with an adult entree purchase.

“We try to make everybody’s first experience one of their best because you only get one in this town,” he says.