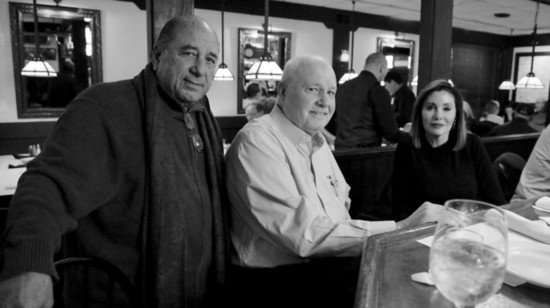 Operated by the Narcisi family for 36 years, DiPiero's features fine Italian cuisine in a classic setting.

I had a fantastic dinner at DiPiero’s Ristorante recently, but the delicious food and wine don’t begin to describe my experience. I met a woodcrafter who hand-carves smoking pipes for friends and family; a former insurance salesman with 15 years in the industry; a partner in The Bear (a pioneering Chicago music club) where artists like Bob Dylan and Peter, Paul & Mary performed in the early Sixties; and a local restaurateur with a loyal clientele. As it turns out all those folks are just one very interesting fellow named Bob Narcisi.

Bob purchased DiPiero’s a decade after its opening; the building in downtown Lake Zurich dates back to the 1930s. He kept the restaurant’s name and made upgrades to the bar and dining areas. The menu went from mostly pizza to full, upscale Italian. As success came Narcisi was able to buy the old telephone building just to the south, which now handles their carryout, delivery, and off-premise catering business, as well as two adjoining properties for parking and a greenhouse. He also bought a rental property available to DiPiero’s employees, enabling them a very short walk to work.

Bob recalled the early days of his restaurant: “It was kind of a biker bar; there were a lot of nice people and some great customers, but we had to find a way to make a transition… I know not all of them liked it when I told them, ‘No more swearing here. As long as you’re at DiPiero’s, you’ve got to watch your language.’ Some of them didn’t understand that, but we wanted to establish a different kind of business. I’ve got to say, I think we have the best clientele in the area now, and many who say they think of us as their favorite restaurant.”

It wasn’t difficult to see why. On this January weekday evening as tables began to fill, many guests dropped by to say hello and chat with Bob all while he kept a watchful eye on everything.

“We’re pretty traditional in what we do. We have a few signature dishes: Our baked clams, we do them the best of anywhere. Our one-pound pork chops, double-boned, are definitely a signature item, as well as our pizzas, and our Chicken Vesuvio and veal dishes.”

Bob made it clear that every dish on the menu is treated with DiPiero’s legendary commitment to quality: “I don’t think you should ever be able to go into a restaurant and order the ‘wrong thing’.” His son Bobby serves as expediter, quality control, and helps design many DiPiero's dishes.

As if on cue, Jimmy Narcisi (Bob’s younger son, who manages the front-of-the-house) served up two dishes proving the point: their Caesar Salad, beautifully crafted from artisan romaine with anchovy, house-made croutons and dressing, followed by the Pork Chop Costoletto, a double-boned pork chop pounded out thin to the size of a small-to-medium pizza, first breaded and pan-fried, then oven-baked with marinara sauce and provolone cheese on top.

“My chef’s been with me for 32 years,” Bob shared, followed by a list of several others with tenures of a decade or more. “Our employees have a lot of say in the company. They know our customers and know the right thing to do for them. We have customers still with us from the first day we opened, and servers who’ve taken care of them for 20 years.”

Bob credits his family’s hospitality business skills to his father, who emigrated from Italy at the age of 10, graduated first in his class at Bloom Township High School in Chicago Heights, and went into business with his father at the family-owned grocery in Chicago. Over the next two decades he would go on to purchase the liquor store across the street, a 30-lane bowling alley (the first in Illinois to install automatic pinsetters), and (eventually) the entire block.

Bob’s early connection to Lake Zurich was the family’s summer home on Route 12 (the future location of Fritzl’s Restaurant). “I never spent a summer in the city until I was 16. We spent each summer here until Labor Day.” After selling his real estate agency, while searching for a business opportunity in the area, he stopped for lunch at DiPiero’s, learned the owner was interested in selling, and the rest is Lake Zurich culinary history.