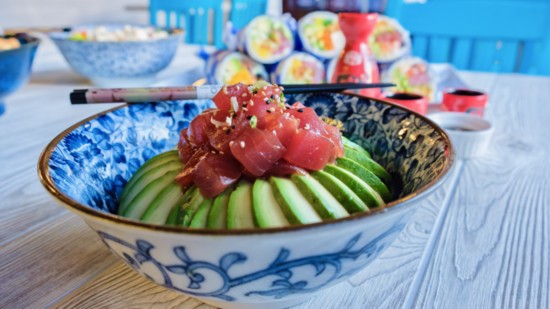 Born in China, raised in Iowa and once a teenage helper in the kitchen of an uncle’s restaurant, Chen put in lots of time and invested plenty of sweat equity before striking out on his own.

His Deer Park restaurant is the fourth in Chen’s growing restaurant empire that includes locations in Chicago and Oak Park, as well as nine outlets in Pete’s Fresh Market, a fast-growing grocery chain in Chicago and the south suburbs.

How about that name? Poke (poe-kay) is a style of fresh, raw fish salad made popular years ago in Hawaii. Typically made with ahi tuna, variations also include salmon or shellfish.

So what’s on the menu? As the restaurant name implies Poke Burrito is a hand-held concoction stuffed with a combination of sushi-grade tuna or salmon, vegetables and savory sauces. If a burrito isn’t your thing, the staff will happily create a bowl brimming with fresh, healthy ingredients. Want chicken? No problem. Vegetarian? Coming right up.

Thirsty? If you’ve never had bubble tea it’s a real treat made from brewed tea served cold with milk, fruit, sugar and tapioca (hence the “bubbles”).

Like ramen? Once you’ve had a ramen the right way at Poke Burrito you’ll never want to eat another bowl of dried noodles flavored by a tiny spice package.

“I guess you could say restaurants are in my blood,” Chen said recently over a fresh ramen he prepared for himself and a guest. Chen explained that he plans to open a couple more restaurants in the suburbs before turning his attention to possibly franchising the concept.

Until then he’ll stay focused on guaranteeing the freshest poke experience for his fast-growing legion of fans.

Poke Burrito is in the Deer Park Town Center (next to the roundabout). Learn more at pokeburritochicago.com or call 847.907.0332.