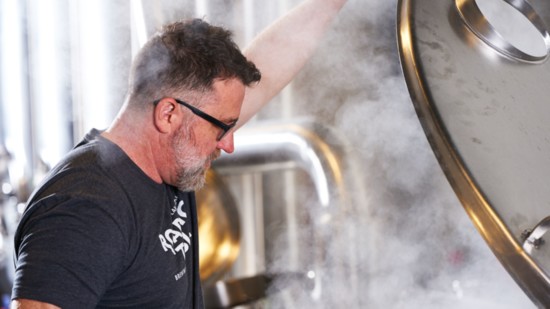 The Evolution of Beer Locally

Tucked away in an obscure corner of downtown Mundelein is a homey taproom sporting beer made in the backroom by the husband and wife team of Greg and Brigitte Bosacki. Scattered around the u-shaped bar sit some regulars. A family is over in the corner making carryout pizza disappear. Outside between the front door and parking lot a couple is nursing their beer and enjoying an evening together on a late summer’s eve.

Over in a Lake Zurich strip mall there's a crowd in the parking lot outside Roaring Table Brewery. No, the beer taps haven’t been moved outside. Instead the lengthening line has gathered for another appearance of the big and loud Chicago Culinary Kitchen (CCK) food truck. From an open window the tattooed, Mohawked matron of CCK, Kristina Gaardbo, takes orders for brisket, pulled pork or amped up Mac ‘n Cheese. After gathering groaning plates at the window customers head inside to Roaring Table to sit at the many highboys or long community tables while servers draw taps for a crowd that can be 2-3 deep at the bar.

Brewer Lane Fearing makes the beer adjacent to the taproom that his designer wife, Beth May, created, featured cool grays, high ceilings, custom woodwork, a wall of windows and a white marble fireplace. Fearing has a fearsome repertoire of beer styles, including big New England IPAs and fruited sours. In addition to inviting food trucks to stop by, Roaring Table often hosts other events from live music to a regular trivia night.

The chill vibe of Bosacki’s stands in stark contrast to the noteworthy design and bustle of Roaring Table, but both breweries share something in common: what’s poured into every glass is made right on-premises. And the beer is really good.

On the north end of downtown Wauconda stands Side Lot Brewing. When weather cooperates, a nice crowd gathers on its spacious patio to catch a breeze off Bangs Lake. Former TV producer Phil Castello brews a wide variety of beers coaxed out of the tiniest of brewing spaces. His favorites are Belgian Tripels, including one called “Jimmy the Weasel.”

Making small batch, high quality beer wasn’t always the case: “I started brewing really terrible kit beer when I was 21,” Castello says. “After not being happy with anything I brewed, I scrapped the home brewing for several years. About 10 years ago picked it back up again with some guidance from my friend and Wildfire Craft Beer Co. Brewmaster, Phil Stubstad, and I haven’t stopped.” Side Lot was opened in 2015 in partnership with Brittany Barth of Lindy’s Landing and SLYCE Coal Fired Pizza.

The Bosacki origin story is similar to Side Lot: “I started brewing beer at home about 20 years ago before there were many breweries in the area,” Bosacki says. “I shared these creations with our friends and family and listened to their comments about the beers I made. After all the positive feedback, we realized we really had something unique to bring to the craft brewery market.”

The State of Illinois now ranks as the 12th largest in local breweries. Lucky for us we don’t have to travel very far to taste a variety of craft beers made with care by brewers like Bosacki, Castello and Fearing.

Here’s a quick sampling of local breweries worth a taste test (or two). Be sure to check hours of operation before heading out: