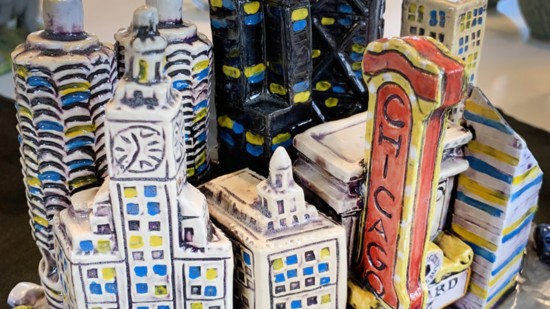 Collaborating on a New Chicago Classic

I have been in the business of working with artists, art and product development for my entire career so you might say I’ve seen “it all.” There is nothing like the fun and excitement of coming across something new that I know my customers will like.

Several times a year I’ll travel out-of-town to scout new talent. On one such trip to Atlanta in 2018 I met Dan Ferguson. I was instantly attracted to the bright colors and whimsical nature of his work. Dan and his wife Nisha are originally from Toronto but relocated to San Miguel de Allende in Mexico with two young sons in 2001.

The artistic collaboration between Dan and Nisha is dynamic; they sign all pieces as “DaNisha.” Their works include functional figurines, bowls, sculptures and dramatic totems. Dan creates the sculptural bodies which support the colorful and painterly images and color-filled stories that are found in the bowls, vessels and characters that make up so many of their designs. He is such a gifted sculptor as one can see in the attitudes and poses of the fanciful animals he creates. Add to this Nisha’s brilliant sense of color and movement and you have a wonderland of pieces that are a joy to behold.

In June of 2019, I spent time with Dan crafting an order of pieces for my gallery when I was struck by an idea: Dan and Nisha needed to create an exclusive piece just for my gallery, Epilogue Arts. I had already collaborated with Dan to have him create some awesome decorative vessels that sold out immediately, but this time we started kicking around another way of paying tribute to the city I love most - CHICAGO!

Dan and I talked about a design that paid respects to Chicago with as many landmark buildings as possible. We debated the merits of how big a piece to create, how elaborate, and how to incorporate the iconic architecture that at first glance says “Chicago.” At some point it started to feel like we were urban planners!

Among the structures people will recognize are the Sears Tower (sorry, I’m a purist) John Hancock Center, the Wrigley building, Wrigley Field’s marquee, Chicago Theater and more. There is even an homage to our Chicago traffic and Lake Michigan.

As the design process unfolded, we attempted to incorporate the famous lions from the Art Institute of Chicago, but the scale proved challenging. It looked a bit as if the big cats were about to eat the city. As they say, we let that drop to the cutting room floor.

Our first Chicago exclusive sculpture is strictly limited to 50 pieces. An initial shipment of 15 pieces sold out in one week. Orders are now being taken for the second wave of production - the cost is $195. When this edition sells out, Dan and I are already planning the next in the series. Amongst the architectural buildings under consideration will be Comiskey Park (yes, the purist in me comes out again) to satisfy my customers who are White Sox fans. I think this series from DaNisha will have legs for a long time given the wondrous city that is Chicago.

In addition to our exclusive Chicago sculpture, we also have DaNisha’s amazing collection of bowls that also celebrate Chicago. Our customers and visitors love the miniature figures of animals that are a staple of their work. One is of a rhinoceros with a bird buddy hitching a ride on his back. Another is of a hippopotamus balancing a globe that opens into a vessel for little treasures. These are just two examples of the whimsy they craft.

Thinking more grandly? We have on display a nine-foot tower of sheep that always evokes a smile. A real balancing act, this tower of silly sheep is perfect for a four-season room or entry way. It needs to be seen to be believed.

About the Author: Rachel Perkal is the owner of Epilogue Arts, 130 Old McHenry Road in downtown Long Grove; EpilogueArt.com. She is so grateful to feature the ever-changing work of Dan and Nisha Ferguson.