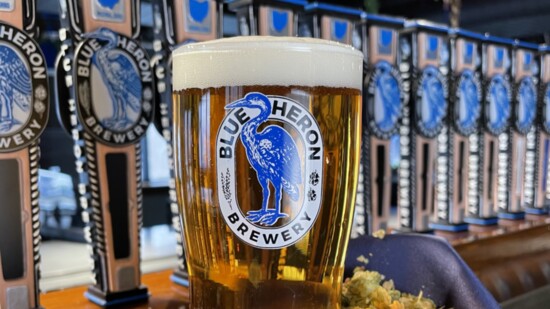 1. Combine butter and Oreo crumbs to form the crust.

2. Combine all ingredients except the crust and whipped cream in a mixer on medium speed for five minutes.

3. Add whipped cream and mix on medium speed until incorporated

4. Using a 4-inch springform pan, place 4 oz. of crust in the bottom and press with hand until firm all the way around.

5. Using a rubber spatula, fill the pan with peanut butter mousse and make smooth on top. Refrigerate for two hours.

Award-Winning in the U.S. Beer Open

The origin of this beer began when Blue Heron’s brewer and co-owner, Mike Piazza, was a homebrewer crafting beers on a propane burner in his garage. New to homebrewing, he wanted to make a style that would appeal to just about every beer drinker. Thus began the first formulations of Matrimony Ale, an American Cream Ale. Easily drinkable and refreshing, cream ale is referred to as a “lawnmower” beer in many cases. A simple recipe allows the beer to show the pale malt and corn that are the primary ingredients in the style. Fast forward 10 years to now when Blue Heron brought home their first competition medal as professional brewers at the U.S. Open Beer Championship in 2020 with this style. Be sure to check out their coffee of this amazing beer this summer!