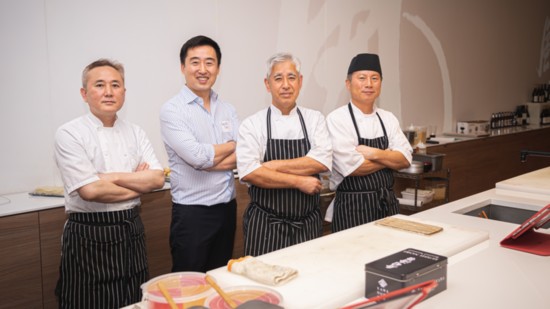 "Our way of making our new tempuras with chicken, mozzarella cheese, pork or fish is very much liked and traditional in Japan, and we're more than happy to share them here in our restaurant," says David Seo, sushi chef and owner of Shumi Omakase restaurant.

Offering guests supreme dining experiences that intertwine all five human senses is David's goal, and that's partly why he added live musical entertainment to the restaurant's ambiance and entertainment vibes.

David says while shumi in Japanese means “hobby,” the key to his restaurant's innovation lies in the name of its most popular dish: “omakase,” which translates to, “I leave it up to you.” It essentially puts the decisions and tones of meals in chefs' hands.

"Our guests enjoy seeing our knife skills while preparing their food out in the open with them, smelling the fresh ingredients, and watching us torch things--they like the whole food story," he asserts.

"When you dine Omakase, the chef presents each piece of sushi and gives guests the full experience behind each one. In the old, traditional way, chefs made sushi on wooden boards in front of customers. Now, we delight in explaining what's occurring," explains David.

As a native of Seoul, Korea, David is a seasoned culinary veteran with 20-plus years of Japanese cuisine knowledge. Throughout his career, he worked with some of New York’s finest and most revered Japanese restaurants."People enjoy hearing about Japanese culture and witnessing us caramelize items so that when they taste their meal, all their senses come together through a memorable pace and experience," David says.

David admits one of his favorite dishes to serve is their "Chirashi Chef's Choice" option, which starts with 13 pieces of sushi and another "Omakase chef's choice" of 21 pieces.

"Interacting with guests and personalizing their experiences are our very important goals," David says. "We truly enjoy our relationships with customers, and love their questions."

Catering Frisco regional corporate groups also has become an important service of Shumi Omakase. David says they've catered a meal for 900 at a nearby Marriott. Among the more than 20 companies or food services with whom David's staff has worked is Fooda, T-Mobile, Spectrum, AT&T and Palo Alto Networks.

"We can do inside or outside events," David assures.

The focus on quality at this Shumi restaurant demands a good deal of time. In fact, the meats they use are aged gently and seasoned. Nearly all of the sauces served are made on-site with ramen broth and eel sauce, which sometimes needs to cook for a week to create the perfect balance of ingredients.

The care and artistry incorporated into the restaurant's food presentations also adds innovative flair to the impressive, satisfying culinary encounters that  keep diners returning for more. Reservations can be made online as well.