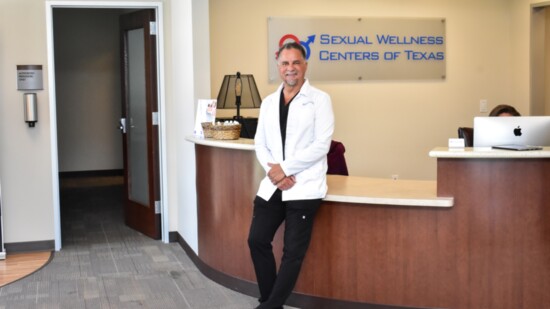 Autumn is an excellent time to schedule facial tightening appointments and to eliminate skin damage caused by summer's sunshine, says Jeff Nuziard, founder of Sexual Wellness Centers of Texas LLC. "It's all about living and loving better, and looking our best for the upcoming holiday season," he asserts.

Jeff uses a complete hormone and vitamin blood panel to know which hormones, supplements, peptides and other pharmaceuticals to prescribe, when warranted.

"Hormone optimization is critical to the overall wellbeing of women, and is of utmost importance. And for men, we offer several prescriptions that will give temporary results while we go through a personalized regenerative process," he adds, indicating the center sees an evenly split percentage of both genders.

For example, Jeff says people can receive four times thicker hair as quickly as within six weeks of treatments.

"From clients, we often hear the phrase 'I'm back.' They mean back to feeling like themselves again, often a younger version of themselves. They say they feel amazing, their stress levels are down while their energy levels have increased, their relationships are better, intimacy is back in their lives, and they are very happy," Jeff says.

Jeff says women were early adopters of the benefits offered at SWC, however, men are "now coming out of the woodwork" to tap into treatments and procedures.

"The staff at SWC of Texas couldn’t have been more professional and caring. I'm happy to say after finishing REGENmax, my marriage has been renewed to our honeymoon days 31 years ago. We're feeling young and full of drive," says Mike L. "I'm so thankful for Dr. Jeff and SWC. I would recommend them to anyone.”

Most women older than 40 years begin to experience hormonal imbalance, says Jeff. "It's been proven that with age, as in men, women begin to lose hormone production annually. Production levels decline by as much as 50% by age 50 to virtually 'hormone less' post-menopausal. During the natural aging process, women begin to suffer many symptoms that just get chalked up to getting old," he adds. "This process is entirely fixable and it's unacceptable to live under these conditions. Each woman has her own set of issues that can result from hormone deterioration and imbalance, and all issues differ from one another."

After Kimberly Berry had a cervical cancer threat in her 20s, she says her body was put through many medical procedures and heavy-duty treatments. So when she discovered she had endometriosis at age 45, a hysterectomy was performed. "For the first two years after that, I thought I was fine. But I wasn't. Normally, I'm pretty high-strung with lots of energy. At that point, I would get weepy or angry or feeling every emotion there is, but I didn't think I was experiencing depression. I just called it 'bad days.' But my body was definitely trying to tell me something."

Kimberly says she tried antidepressants prescribed by her primary care physician, however those left her completely numb emotionally and feeling out of sorts physically.

Since becoming a SWC client in March, Kimberly says she's received the whole package of rejuvenating options, including laser treatments. "My headaches and confusion are gone. I'm no longer disoriented, I'm happy and it's been phenomenal. It's important for both men and women to take care of personal health."

"I was amazed at how hormonal balancing helped my mood and energy level," says SWC client Susette Brandt, who went through menopause during her 50s. "I had started to think I should go on antidepressants or anxiety drugs, but Jeff helped me to get back to feeling normal and with clear thinking again. I think having better mental health is a better way of aging."

Susette says SWC cosmetic laser procedures also help her feel fresh. "People can't tell that I've had a facial treatment, but they'll say, 'Wow, you look rested, or that I seem to be glowing.'"

She adds that Jeff makes it easy for men to discuss cosmetic options, too. "Our cells lose their collagen. It happens to all of us, it's just nature. But I've learned we don't have to live with the stuff we complain about, or those things that worry us."

For the first-year anniversary of SWC, the Frisco team is celebrating with an open house on Sept. 2 at their Eldorado Parkway facility. Jeff says they will host a happy hour from 5-8 p.m., including Hutchins BBQ and adult beverages. "There also will be door prize giveaways, with a grand prize worth $7,000," he adds.

Special pricing will be offered on certain procedures during this anniversary day from 10 a.m. to 8 p.m.

Jeff says he's eager to assist as many people as possible in getting to their proper wellness balance. He opened another SWC facility in Bentonville, Arkansas, and is slated to open a third location in Jacksonville, Florida, during October. He's looking at a fourth facility possibly to open in Scottsdale, Arizona, during 2022.