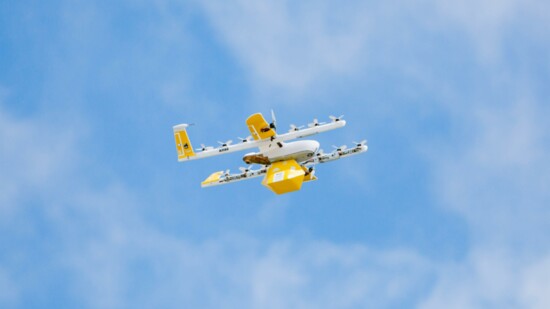 Look, Up In The Sky

Photography by Courtesy of Wing

Look! Up in the Frisco sky! It's a bird! It's a plane! It's Super Deliveries! Retail orders are being delivered by air to the lawns of Frisco residents.

Frisco Station, a 242-acre mixed-use development in the North Platinum Corridor of Frisco, now is home to a drone delivery facility operated by Wing, one of the first providers of U.S. drone delivery service. Among those first innovative deliveries were items from Walgreens in a first-of-its-kind store-to-door commercial drone delivery service for customers in Frisco and Little Elm.

Wing is a subsidiary of Google's parent company Alphabet.

In the future, Walgreens employees will process orders and load packages onto the delivery drones, and Wing will oversee operations of the delivery service.

Wing representatives stated the aircraft arrives in small containers that serve as tiny hangars, allowing each store to quickly and easily deploy a small, dedicated fleet from its parking lot, on its roof or in small spaces adjacent to the building.

“Frisco Station was designed with futureproofing in mind, bringing next-generation mobility options to reality today,” says Robert Folzenlogen, senior vice president of strategic development at Hillwood. “The addition of Wing and its first-of-its-kind innovation builds upon Frisco Station’s foundational pillars of Smart, Creative, Healthy, and again showcases the development nationwide as the place where pioneering visions can be put into practice and maximized well into the future.”

Frisco Station managers claim to be one of the region’s leading mixed-use developments since 2015, offering the necessary infrastructure to support emerging technologies across all nodes.

In 2017, Frisco Station built one of the first vertiports globally, putting into place the infrastructure needed to move goods autonomously and eventually people. Additionally, announced in 2018, Frisco Station became one of the first connected communities in the nation to be constructed with AT&T’s 5G from the ground up, enabling real-time connectivity through each of its districts and its planned 30-acre programmed park system. That same year, the Frisco Transportation Management Association, created by the Frisco Station Partnership, launched drive.ai’s autonomous vehicle pilot program to encourage connectivity between Frisco’s emerging destinations as part of a multi-mobility plan.

In preparation for the launch at Frisco Station, Wing conducted test flights since June at Hillwood’s AllianceTexas Flight Test Center, a UAS testing facility in Fort Worth.

The Flight Test Center is one component of the larger AllianceTexas Mobility Innovation Zone (MIZ), a “do tank” leading in smart infrastructure deployment. The MIZ offers mobility visionaries in surface and air, full access to a testing ecosystem, resources and partnerships essential to comprehensively scale and commercialize their technologies.

“Frisco Station is an excellent spot for one of the first drone delivery facilities in a major U.S. metro,” says Jonathan Bass, head of marketing and communications for Wing.

A small number of drone delivery flights began the week of Oct. 25. Community demonstrations also were made available.

Wing spokesperson Jacob Demmitt says their drones are capable of flying in strong winds and light rain. "We do have pilots who oversee operations and monitor the weather. If weather ever gets too bad, they simply 'close' the merchant. Customers in the app see a message that says we're closed and provides an estimate on when we expect to reopen."