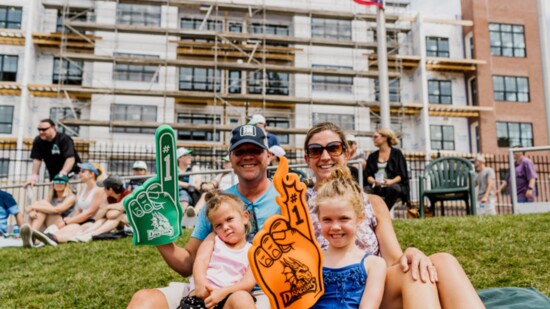 Back to the Ballpark

Photography by The Dayton Dragons

Since the Dayton Dragons launched in 2000, the most popular way to enjoy a summer day or night on the town in the Gem City has been to head down to Day Air Ballpark (formerly Fifth Third Field) and watch the hometown team. From checking out the MLB stars of tomorrow to enjoying the on-field entertainment and getting a good meal, a Dragons game was the place to be, as soon as they came on the scene.

But with the COVID-19 outbreak, the Dragons were one of the many organizations that had to hit “pause” and wait. While Major League Baseball was able to produce an abnormal 2020 season, the logistics were too much to overcome for Minor League Baseball, which operates 13 leagues in the U.S. and Canada.

As COVID infection rates continue to fall and we get closer and closer to the pre-pandemic “normal,” Day Air Ballpark is one of the most welcome signs that we’re on our way. The Dragons opened their home season at 30% capacity on May 11, before returning to full capacity on June 8.

Dragons Executive Vice President Eric Deutsch is excited to welcome fans back after the 2020 hiatus. “Obviously we’re very pleased to be open,” Deutsch said. “Last year was a terrible year for everyone; so not being able to host fans or games and having a big ‘zero’ in the 2020 calendar was not fun.”

Like the rest of the world, the Dragons evaluated their organization in 2020. “I think the pandemic and the crisis made you rethink and analyze a lot of things,” Deutsch said. Fans will see the result of that reflection in a more digital ballpark. Day Air Ballpark is now cashless; and all tickets are now digital, instead of paper.

Also like the rest of the world, the Dragons had to ease into their return. After the 2020 season was canceled, the organization’s focus turned to what a potential 2021 season would look like, along with many, many contingency plans. “What we started doing in 2020 was to bring staff back and start preparing fans for the season, whether that was opening fully, or at 10%, or 15%, or 30%,” Deutsch said. The Dragons got the okay to open Day Air Ballpark to 30% capacity for their home opener. With less than one-third the normal crowd allowed, the ballpark experience had to be modified. There were zip-tied seats and fewer concession options to choose from; but with Day Air Ballpark back to full crowds, the full array of food options that Dragon fans remember is back too.

“One of things we had to do with 30% capacity was to get rid of some of the grill carts that would allow people to collect and get in line together, because the food was made fresh,” Deutsch said. With full crowds comes their return. “So a lot of the tastes and flavors you’ve seen in the past—from the Tex-Mex cart to the nachos, ice cream, burgers, dogs, brats,

chicken, and pizza—they’ll also be around. We’ve got peanuts, popcorn, candy—all the ballpark favorites.”

Fans who would want to pair their meal with a drink will be happy to know that the ballpark’s alcoholic options are also back to normal. “We have Heidelberg Distributing Company, which does Anheuser-Busch products,” Deutsch noted. “We have a group called Moeller Brew Barn, a brewery from up north. They’re in the ballpark. We’ve got cocktails. We’ve got our Sam Adams pub that has a bunch of craft beers.”

Besides the general seating options, Deutsch says the organization is excited to be able to offer both suites and party decks at full capacity, as well. Suites allow up to 20 people in an indoor area, plus balcony seating, while party decks fit larger groups, with 50 tickets and 50 hats per deck, for a mix of an indoor-outdoor area. Both the suites and the party decks include special dining options. And, Deutsch says, the changing health guidelines from the state of Ohio allowed the organization to find a way to thank fans for working through the uncertainty of COVID with the team. “When we did open at 30%, the health department allowed us to open up suites and party decks, but only at 50% capacity; so obviously we reduced pricing by 50%. Now that we’re back to 100%, we’ve kept pricing at 50%, as a ‘thank you’ to the community for supporting us and being behind us as we welcome them back to the stadium. It’s kind of a nice way to enjoy a party deck or a suite at full capacity, but you only have to pay 50%. That’s been really well received, and we’re still moving a bunch of suites and party decks.”

As for the baseball team itself, there is one notable change: The Dragons have moved up a slot in the Cincinnati Reds farm system. They’re an inaugural member of the “High-A Central,” a 10-team league composed of Midwestern High-A teams. The Dragons spent all of their previous 19 seasons in the Low-A Midwest League.

Deutsch admits he’s not a big baseball guy, but he says the experts on the game in the organization have educated him on what the change means for fans. “I regurgitate what the baseball guys tell me, and they said we’ll get some of the older players, some better pitching. We’ll get some of the older players who might have a better chance of making it to Double-A. If a guy gets to Double-A, he has a shot to get to the majors. I think once some of the guys you see here get to Double-A, those are the guys who could be the ones you’ll see on the Reds or other major league teams. We might also get some more first round draft picks, so that can be nice when the draft is held. We’re excited about high level baseball, and that dovetails very nicely with the family entertainment atmosphere of the ballpark.”

Pre-COVID, the Dragons made sure that Day-Air Ballpark was a community hub for more than just Dragons baseball. And with restrictions being lifted, Deutsch says Dayton can look forward to that once again. “We’ve got a flea market planned, we’ve got some weekend baseball tournaments, we’ve got movie nights, we’ve got our beer fest. We’ve got our 5k, which can be in person or virtual. We’ve got our kids’ club. We’ve got some yoga nights planned. There are a lot of other things that have not been announced or started; but we’ll definitely have them, come this summer and fall.”

All in all, Deutsch says fans should expect the same good time that they’ve always had. “[The experience should be] hopefully a return to somewhat normalcy. I think we still have a few things we can’t get back to 100%, but definitely 90-95%. [The fans] will find clean. They’ll find safe. They’ll find a lot of new changes in the ballpark to make them feel good about going out into public. And I think they’ll have fun, they’ll have a good meal, and they’ll have a good time.”

“[The fans] will find clean. They’ll find safe. They’ll find a lot of new changes in the ballpark to make them feel good about going out into public.”