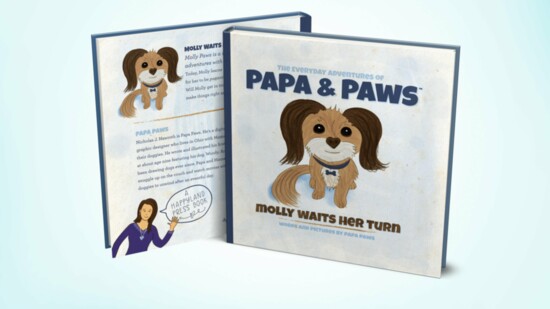 Photography by Illustrations by Nicholas Nawroth

One day at work a few years ago, Nicholas Nawroth drew a doodle that looked like his dog, Molly Paws. That doodle ended up being the spark that would launch his children’s book series, Papa & Paws. Since then Nawroth has written and self-published three books aimed for children ages 2-5, based on the dogs in his life.

Since Nawroth was a kid, he’s had a passion for putting stories and illustrations together; but it took Molly Paws (along with the rest of the Paws family) to turn that passion into books. When Nawroth was 9 years old, he made his first comic book, starring his dog Woody. Comics became a passion for Nawroth; and when it was time to pick a career, comic book writing was a natural choice.

So Nawroth enrolled at The Joe Kubert School of Cartoon and Graphic Art in Dover, New Jersey. He soon decided that the school (and New Jersey) weren’t quite for him, so he returned to Dayton and got a degree in graphic design from Sinclair College. He channeled many of the same skills that he had crafted as a kid with a passion for comics into a successful career in graphic design; but when he sketched that drawing of Molly Paws, The Everyday Adventures of Papa & Paws was born.

The inspiration for the name came from his everyday interactions with Molly. “I’d take her on car rides,” Nawroth said. “I’d take her to get pizza and run errands and get gas, things like that. I started calling them “Papa Paws Adventures.”

The books teach kids a virtue, such as patience or sharing. In the first book, Molly has to have patience waiting for her treat, while her parents make dinner. Nawroth himself stars as Papa Paws, with his wife, Ellen, as Mama Paws. Ellen Nawroth edited the book. She also took the layout and helped him craft the story and the text to be age appropriate, a practice that she’s continued for the subsequent books.

Nawroth then had to figure out how he wanted to publish the book. He chose self-publishing, because it allowed him to be able to control the process. “I liked the idea of being in control of the story and telling the story that I thought was important to tell, in a way that was meaningful,” Nawroth said.

When it came to picking a date for the book to be released, Nawroth decided to go with one that had personal significance to him. His father passed away on June 8, 2011; so every June 8, he tries to honor his dad by doing something fun, interesting, or new. In 2020, that meant releasing his first book. The reception was positive. “It had a pretty good release, for a first book from an unknown author,” Nawroth said.

A puppy whom Nawroth and his wife got in 2020 helped inspire his second book; and for his third book, he decided to tell the story of Gracie, a dog of Nawroth's who ended up losing her ability to see, but didn’t let her vision loss stop her from living.

Now he’s ready for the next story. “I have developed an initial storyline for book four, but I’m still thinking about that and how I want to do it,” Nawroth said. “I may change it quite a bit, because it’s getting to be a big family. So maybe these are cousins or next door neighbor dogs or something.”

Even after that book is done, Nawroth said that his canines have already provided inspiration for many more stories. “I’ve got a list probably as long as my arm. I could retire tomorrow from my day job, and I’d have enough work just on these books to last me a lifetime, I think.”