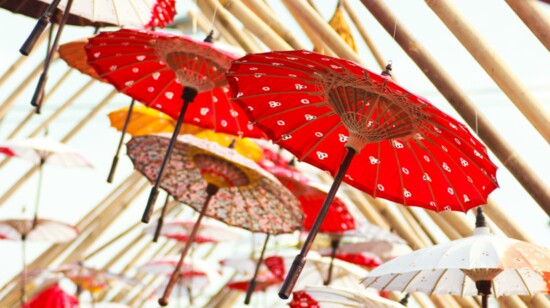 Pondering on how the Umbrella came to be

The basic umbrella was invented more than 4,000 years ago. There is evidence of umbrellas in the ancient art and artifacts of Egypt, Assyria, Greece, and China.

These ancient umbrellas or parasols were first designed to provide shade from the sun. The Chinese were the first to waterproof their umbrellas for use as rain protection. They waxed and lacquered their paper parasols in order to use them for rain.

Origins of the Term Umbrella

The word "umbrella" comes from the Latin root word "umbra," meaning shade or shadow. Starting in the 16th century. the umbrella became popular in the western world, especially in the rainy climates of northern Europe. At first, it was considered only an accessory suitable for women. Then the Persian traveler and writer Jonas Hanway (1712-86) carried and used an umbrella publicly in England for 30 years. He popularized umbrella use among men. English gentleman often referred to their umbrellas as a "Hanway."

The first all umbrella shop was called "James Smith and Sons." The shop opened in 1830 and is still located at 53 New Oxford Street in London, England.

The early European umbrellas were made of wood or whalebone and covered with alpaca or oiled canvas. The artisans made the curved handles for the umbrellas out of hardwoods like ebony and were well paid for their efforts.

After that, compact collapsible umbrellas were the next major technical innovation in umbrella manufacture, which arrived over a century later.

In 1969, Bradford E Phillips, the owner of Totes Incorporated of Loveland, Ohio obtained a patent for his "working folding umbrella."

Another fun fact: Umbrellas have also been crafted into hats as early as 1880 and at least as recently as 1987.

Golf umbrellas, one of the largest sizes in common use, are typically around 62 inches across but can range anywhere from 60 to 70 inches.

Umbrellas are now a consumer product with a large global market. As of 2008, most umbrellas worldwide are made in China. The city of Shangyu alone had more than 1,000 umbrella factories. In the U.S., about 33 million umbrellas, worth $348 million, are sold each year.

As of 2008, the U.S. Patent Office registered 3,000 active patents on umbrella-related inventions.