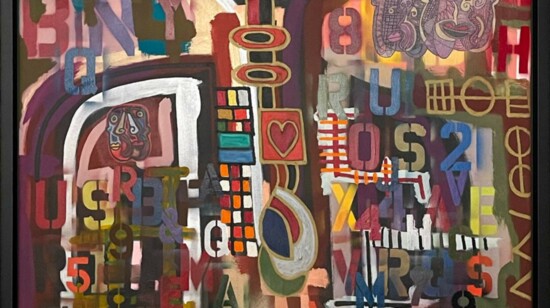 A Passion for Art

“We paint because we have to.” These words, spoken by a co-worker years ago during a summer job at Harmony House in college, inspired Rodney Denne to pursue a career in art. The co-worker, Bob, was an artist himself, and Rodney describes him as “a great mentor.”

As a child growing up in Clarkston, Rodney enjoyed drawing. His mother did ceramics, and creativity was part of his life. Later, Rodney joined the military in the U.S. Air Force, and during that time started drawing again. This time, he says, he became enamored of the “bohemian ideology of being an artist.” From drawing, he bought his first canvases and started painting, an act which was initially surprising to his father, who wondered what he was doing.

What he was doing led to a successful career as an artist. He sold his first painting at 26 years old, in only one day. Since then, he has continued this success, with his work currently represented at Art Leaders Gallery in West Bloomfield. His large scale, abstract contemporary paintings are highlighted at the gallery and are the focus of a book signing, artist talk and reception on May 21.

Rodney’s work has been exhibited in fine art galleries and in private collections across the country and Europe, including Art Prize in Grand Rapids, the Kresge Foundation, and the Musee D’Art-Moderne in Paris.

Rodney draws inspiration from studying other artists. He believes it is important to learn from others and from that, to develop your own ideas and style. “I am fascinated with other people’s art,” he says. Cy Twombly, Franz Klein, Bob Thompson, William de Kooning, and Mark Rothko have been particularly inspiring for him.

Beyond painting, Rodney enjoys writing poetry and listening to jazz music. “I love jazz,“ he says. “It seems simple but it is truly complex.” Much like his artwork, there is more going on beneath the surface if you pay attention. What a person gets out of a piece of music, the written word, or art is really up the individual. “When you make a painting, it’s for the world. I want people to make it their own. I want them to find something new in it every day.”

As for his own artwork, Rodney notes they take several forms. One group he refers to as “Exposed.” These feature layers of various hues on top of each other with abstract human forms and explore themes of mortality and immortality, the philosophic poet, and the muse. Inspired by the work of Jean-Michel Basquiat, these paintings are bold, colorful, and give the viewer much to observe.

“Contrast and Dialogue” are Rodney’s black and white paintings with limited color. These pieces are inspired by Willem de Kooning. With these pieces, Rodney explores shapes, scribbles and lines in a way that explores concepts of personality and emotion.

Rodney notes that Jean-Michel Basquiat was once told, “Remember, your audience hasn’t even been born yet.” In Rodney’s case, it seems they have. For more information on Rodney’s work, visit artleaders.com.