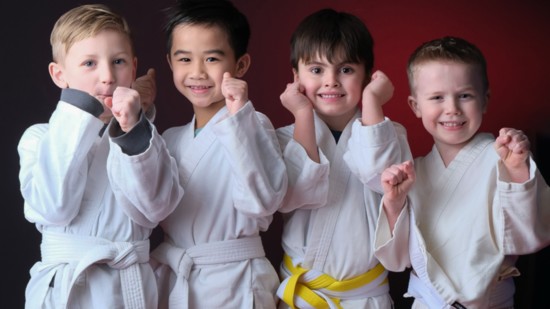 Photography by Courtesy of Stuart Lee

Co-founded by Harvy Berman, Scott Lewis and Bill Thompson, Warrior Way Martial Arts Alliance opened its doors in Walled Lake in October of 1997 with the goal of helping people better their lives through self-confidence, discipline and physical fitness that training in the martial arts can bring. In addition to the distinction of having the longest-running Brazilian Jiu-Jitsu program and finest Muay Thai training in the state, Warrior Way also has a large youth program of over 200 students that is taught by a variety of instructors, some of whom have a background in education.

Martial arts is a routine that improves focus and self-discipline, developing the mind as well as the body. Students at Warrior Way learn to control themselves to respect others, which naturally leads to a respect for self, improving self-esteem and self-confidence. This benefit often carries over into school, helping to not only improve behavior but also academic performance.

“The reason most people come to us is because their kid lacks confidence or is getting bullied, and we can teach them real-world self-defense,” Warrior Way instructor Brandon Fracassi-McDaniel explained. “Kids have to be able to defend themselves just like they have to be able to swim. These are life skills that every kid needs to know and are really non-negotiables. Kids should do martial arts their entire life.”

Rather than promoting violence like many so often assume, martial arts opens the door to building a solid foundation of self-confidence and a healthy sense of self-worth. In fact, the core philosophy of Warrior Way’s youth programs is non-violence, teaching children how to respond in a calm and controlled way that will stop, rather than escalate, violence.

“At the younger ages, we actually teach martial arts as a game,” Fracassi-McDaniel explained. “It’s never really considered or talked about as a fight until later.”

In addition to equipping children with skills to help them deal with bullies, the other objective of Warrior Way’s youth program is to instill children with character traits that will yield success in all areas of life. There are eight chapters in Warrior Way’s character development program: tolerance, perseverance, courage, responsibility, health, respect, strength and honor.

“We introduce the traits on an organized and structured schedule,” Fracassi-McDaniel said. “All of the instructors have personal stories that we can connect to them, so no matter which instructor students have, they’re hearing the same message and know how to make the trait a part of their everyday lives.”

There are three main age groups within the youth program:

“Unlike other programs where you have to pay to test into the next level, this is an all-inclusive belt program,” Fracassi-McDaniel said. “If they’re ready, they move on.”

Another difference between Warrior Way and other martial arts programs is that although they do have a lot of teenagers who help instruct the classes, there is always a full-time instructor (several of which are Black Belts) also there, watching and giving feedback versus leaving the teen to instruct the younger ones alone.

“A huge part of our program is mentorship,” Fracassi-McDaniel said. “We help them become mentors as we are right there to teach them how to talk to kids and how to talk to people in general. We actually get emails from former students years later, letting us know what they’ve learned from us.”

Warrior Way accepts new students year-round, and since its program has been developed with new students in mind, students can join a youth class any time throughout the year. Fracassi-McDaniel said he encourages students to continue their training over the summer, so, just like school, there is no summer learning loss or gap of knowledge.

Almost every school and instructor in the state can trace their training in Brazilian Jiu-Jitsu back to Warrior Way as Berman, with over 20 years of experience, has worked hard to help grow the sport in Michigan. Also, in 2003, Warrior Way added the skills of World Champion Muay Thati Kickboxer Matee Jedeepitak to its already-impressive staff of instructors. As a professional fighter, Jedeepitak held two of the most prestigious titles in his homeland of Thailand: the Lumpinee and World Muay Thai Council championships. As an instructor at Warrior Way, he uses his life-long experience to help students, including the youth, perfect the traditional style of Muay Thai Kickboxing.

Based on reality, Warrior Way provides people of all ages and physical abilities with a realistic form of self-defense that anyone can learn. As a way of honoring those who protect the community, Warrior Way also works closely with the local law enforcement to help keep those in uniform safe while on duty. For more information, call (248)-960-4884 or visit warriorway.com.