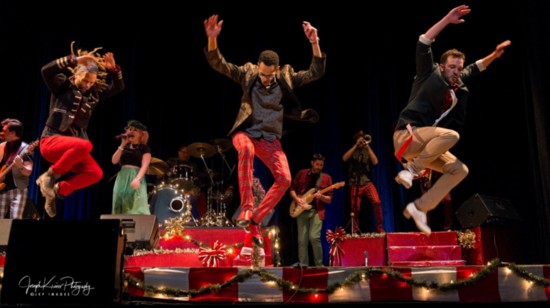 "I taped nickels to the bottoms of my sneakers and began to dance on the tile," Justin Lewis says.

He was just 5 years old when he saw the movie Tap, inspiring his life-long love of tap dancing.
For him, it was passionate and exciting to watch—Justin was born to dance.

"I come from a dancing family. My grandfather was a tap dancer in college. When my dad was younger, he was in a family act with his brothers performing songs and dancing throughout the D.C. area, and before college, my mother studied ballet. Performers themselves, they got on board when I wanted to tap."

What followed from there were tap lessons, travel, performances and rehearsals—too many to count. In Maryland, as he grew, dance was important to him, but it became solidified the day he had a sit-down conversation with his father.

"When I was 13 years old, my father asked me what I wanted to do with my life," Justin says. "And I remember saying to him, I want to find a way to do this the rest of my life. He said to me, you can find a way to do it if you work hard."

Those words of encouragement fueled his dream. Following college, Justin began his career teaching tap at a studio in Virginia, and before he knew it, others began to seek him out to teach their kids. He expanded his network from simply teaching individuals to teaching master classes, and also choreographing for studios. At the same time, he was dancing with other performance groups. That opportunity to continue tap dancing was important to Justin.

"As I perform, the rest of the world falls away," Justin says. "I feel on top of the world, like nothing in life matters. I forget about the issues and troubles in life and focus on the sound and the art and how I can tell a story with my movement."

Tap dancers utilize the whole body as a percussion instrument, which, over time, can extract a toll. Justin explains the cost he has had to pay.

"It's been tough because I have knee issues right now. I'm at a point where I can't go full-on in the studio when teaching because I don't want to injure myself for performing; trying to find the balance of what I can and can't do. That's an awakening for me recently, adjusting with age and wearing my knees out."

In spite of the physical setback, Justin's career is flourishing as he focuses on the choreography side of dance.

"I love the path I'm on of choreographing musicals," he says of his latest opportunity, The Hot Shoe Shuffle at Boca Raton's Wick Theater.

"I'm working with professionals that know dance and can grasp the moves, so I don't have to go full-out physically. I've become an artistic director of sorts since I'm dealing with professionals, and I've enjoyed this experience so much! I've gotten great feedback about my work, and there's a lot of buzz and talk about this show getting picked up and taken to other cities. So, I'm excited!"

Here's hoping that The Hot Shoe Shuffle is picked up and that we in Frederick get a chance to see this toe-tapping show! In the meantime, catch Justin, tapping on occasion alongside Jamie Kaye, at the Cellar Door in Frederick. Justin and his wife, Abigail, enjoy living in Frederick. They enjoy eating at the restaurants, walking around downtown, stopping in at the Pop Shop and relaxing on Brewer's Alley rooftop.