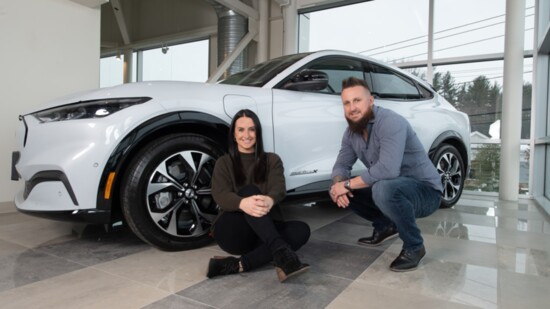 The family-owned auto dealership is embracing electric and solar options

It’s starting to feel like we’re on the cusp of an ecological sea-change in the automotive industry.

Case in point: Ford Motor Co., recently announced that its entire inventory of new automobiles in Europe will be electric by 2030. The news came on the heels of an earlier statement that Ford would seek to be an all-electric car and truck maker by 2035.

And, in a move that seems intent on quelling naysayers who might question the idea of electric vehicles, Ford this year unveiled it’s all-electric Mustang version, the Mustang Mach-E.

The new version of the iconic Mustang has a crossover hybrid body style but still,  is there any vehicle more iconic of the gas-guzzling muscle car than the Ford Mustang?

As if that weren’t enough, Ford now is planning an all-electric pickup, the F-150 EV.

It’s no accident that Ford picked its two most iconic vehicles to experiment with an all-battery powered engine. Both are strong brands that will help convince the public that cars don’t need to run on gas.

At Monaco Ford, the family-owned car dealership is embracing Ford’s ecological approach and have eagerly anticipated their first shipments of the Mustang Mach-E.

“We as a family and a company are welcoming anything to reduce our carbon footprint,” says Chrissy Monaco, co-owner of Monaco Ford. “We all have to do something to save our environment.”

The electric version of the Mustang and F-150 will join a growing fleet of electric and electric hybrid vehicles that Monaco already sells, including the hybrid F-150, the Ford Escape and the 2021 electric hybrid Explorer.

“We consider ourselves extremely green here at Monaco Ford,” said Mike Monaco. “We’ve welcomed electric vehicles with open arms. We just completed a solar project here at our dealership that will cover about 80 percent of our electric usage and we’re putting in electric car charging stations as well.”

The hybrid F-150 is a popular vehicle locally and interest in the all-electric version is running high, Chrissy said.

“People are open to change and the new automotive technologies that are being developed,” she said. The new Ford electric vehicles, she added, have “amazing torque” and can run for 300 miles on a single charge.

“Electric vehicles in general have done very well around here, many people buy them as a third family car. Also, Ford’s really put a lot of time and technology in their electric vehicles.”

The Ford F-150 EV is expected to go into production next year and will retail starting at the mid-$50,000 range, though Ford hasn't released exact pricing yet.