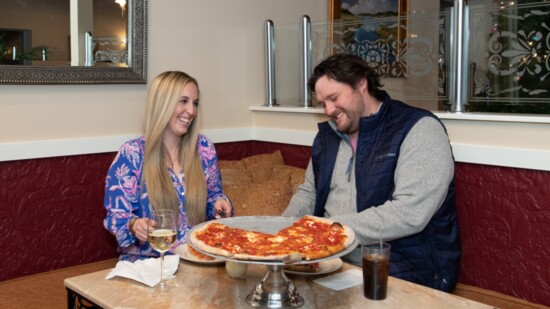 Sometimes the Sweetest Love Stories Are the Small Ones

FROM RUSSIA, WITH LOVE

Tatiana Naumova and Ilya Smirnov met about eight years ago in Russia. She’s a well-known competitive dancer and instructor there and was the soloist dancer of one of the most famous shows in that country. Ilya is the winner and runner up of multiple Belorussian and International ballroom championships.

Tatiana was an instructor at a studio in Russia where Ilya came to teach. They’ve been together ever since.

Both started dancing when they were children but their love of dance, Ilya says, was just one of the things that drew them together. They each also longed to travel and one day see America.

Together they began dancing and traveling throughout Belarus and Russia.

“We traveled a lot and we danced in some very famous shows,” Tatiana says.

It was a fun, adventurous life and about two years ago they found an ad online for dance instructors in the U.S.

They applied for the jobs, were accepted and began the arduous task of applying for U.S. visas intended for non-citizens who can work and live in this country if they have extraordinary abilities in the arts or sciences.

They arrived in October of 2019 and today work as instructors at the Fred Astaire Dance Studio on Main Street. They also live in Glastonbury.

Their journey and life here has been a joyful struggle, the couple says.

“We are very happy here. We like the nature of the people and we love to work here,” Ilya says. “We went through a lot of difficult situations and we became stronger. It’s like a life lesson for us.”

One of those difficult situations was Covid-19. Just months after they arrived the Coronavirus struck, shutting down the dance studio. They had to start conducting dance lessons and classes via Zoom, a daunting task since they were still struggling with their English.

“It’s a very big problem with the English,” Tatiana says. In person, when the language barrier gets in the way, she can use body language to communicate with her dance students.

“I can help you with my eyes and my hands. But with the Zoom class, it’s not possible.”

They live near the studio and don’t have a car, so they walk most places locally. Ilya has his driver’s license and sometimes they rent a car if they want to venture farther afield.

Their opposite personalities, the couple says, along with their shared interests, has helped them overcome the hard times and keeps them together.

Each is quick to credit the other’s strengths.

Tatiana's very strong, outgoing and funny, he says of her.

Ilya is quiet, but sure and steady, she says of him.

They’re both hoping to stay here and continue to teach dance as long as possible.

“We love it so much here,” Tatiana says. “Everyone is so nice and it’s so beautiful.”

After totaling her beloved Volkswagen Beetle in March of 2014, Sarah French needed a new ride.

Knowing she’d want another VW Bug, her dad stopped at Gene Langan Volkswagen, got a salesman’s business card, and gave it to Sarah.

When she went to the dealership Sarah figured she’d be meeting “a typical car salesman.” In her mind, that meant an older man who would push her to make a fast deal on a car.

Instead, she met Billy Thomas, a cute, 25-year-old college student working at the dealership part time.

“He was definitely not what I thought a salesman would be,” Sarah says.

She went home, told her mom about the cute salesman she’d met, and her mom urged her to call him. She didn’t, so Mom took matters into her own hands and called on Billy, urging him to text her daughter.

He did and the couple started dating and fell in love.

A Glastonbury native, when Sarah finished her Master’s Degree at the University of Hartford she decided to do her residency in prosthetic medicine in Tennessee.

“I had never left home but I had always been interested in the South so I told (Billy), ‘If you want to come, join me, or else we can date long distance."

He went with her.

The couple married in 2019 and still live in Tennessee, where Billy is the general manager of a logistics company and Sarah is a prosthetist orthotist  They have one child and Sarah only recently sold the VW Beetle, which she nicknamed “Benny,” that she bought from Billy in 2014.

"I always tell my husband ‘I love our love story.’ But looking back on it now, it was a little awkward,” she says. After buying Benny the Beetle she filled out a score-card survey for the dealership, including what she thought of the salesman.

LOVE IN THE TIME OF CORONA

When she was in high school Maura Yellen remembers distinctly the boy who was in the next grade up from her.

Matthew Biekert was captain of the St. Bernard High School football team and Maura’s clearest memory of him is of a loud, outgoing, gregarious boy whom she considered utterly unattainable.

“In my world, he was very old and very loud,” she says with a laugh.

During college years later, Maura’s internship director turned out to be Matthew’s mom.

“After chatting with her she caught me up on all the great things her son was doing, the guy I just knew as the captain of the football team. He was living in Utah and was working in outreach at a drug and alcohol treatment center. I reached out to him on Facebook merely to say hello. After weeks of talking and growing close, he came home for Christmas in 2015.”

They went out on a date, a pizza dinner at Luna Pizza on Hebron Avenue, and then watched the movie Elf back at Maura’s family home in Glastonbury.

“It was a really great date, we had a really good time and we saw each other almost every day for two weeks. We fell in love and after graduate school I moved out to Utah with him.”

This year, after a couple of false starts caused by the pandemic, Matthew proposed and the couple is planning a June, 2022 wedding. Matthew originally tried to propose to Maura in March during a birthday party friends were planning for him, but the party got canceled because of Covid-19.

He made new plans to propose instead in July, but again the virus interrupted the couple’s plans.

“Finally, in October, he proposed to me on a beach in Massachusetts,” Maura says. “We’re planning a wedding for June of 2022 because we’re waiting on the virus to settle down.”

Each year,  to mark their first date, Matthew and Maura return to Luna Pizza for dinner. The couple lives in Glastonbury and telecommute for their jobs in Utah.

“We have had so many changes in the past five years but one thing remains the same... on Dec 20th we share a large cheese pizza from Luna in Glastonbury," Maura says.